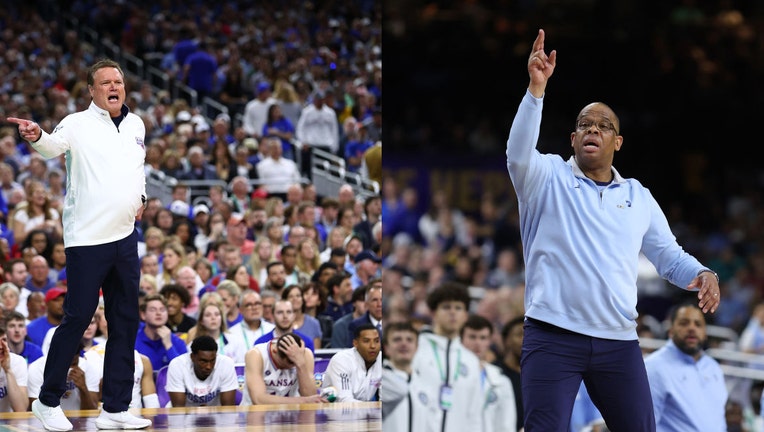 WASHINGTON - The college basketball season will end Monday night when the North Carolina Tar Heels and Kansas Jayhawks battle for the national championship in New Orleans.

Kansas and North Carolina are meeting in the title game for the first time since 1957, a triple-overtime game won by the Tar Heels 54-53 over Wilt Chamberlain and the Jayhawks.

These two blue-blood programs have championship pedigree and are seeking to add another title to their respective trophy cases. The Tar Heels are playing for their seventh national championship, while Kansas is going for a fourth title.

UNC head coach and alum Hubert Davis is having a great season leading a team on the cusp of a title in his first year. Kansas head coach Bill Self is seeking to win his second national championship.

Davis played for the Tar Heels when they lost to Kansas in a 79-73 heartbreaker in the 1991 national semifinals. Davis said he re-watches that game every year.

North Carolina punched their ticket to the championship game with a win over their bitter rival the Duke Blue Devils 81-77 Saturday night in a Final Four instant-classic. The matchup between the Blue Devils and Tar Heels was their first meeting in the NCAA Tournament in 258 all-time games played.

North Carolina has won 10 of their last 11, including a 94-81 win at Duke on March 5 that ruined Blue Devils coach Mike Krzyzewski's going-away party at Cameron Indoor Stadium.

RELATED: Kansas cruises to 81-65 win over Villanova in Final Four

Kansas is heading back to the national championship since 2012 after a dominant 81-65 win over the Villanova Wildcats in the Final Four Saturday night.

If North Carolina wins Monday night, they would become only the second 8 seed to win the NCAA championship. The other team to pull off this feat was 1the 985 Villanova team, which pulled off one of the sport's greatest upsets by beating the Georgetown Hoyas.

Kansas won the 2008 national title in Self's fifth season, but it's been a lot of title-less runs since a loss in the championship game, another in the Final Four, and five other trips to at least the Sweet 16.

The 2019-20 Jayhawks may have been Self's best team, but they never got a chance to prove it when the pandemic wiped out the NCAA Tournament.

Although both schools are separated by 1,100 miles, Kansas and North Carolina have been linked to each other for years. Larry Brown played at North Carolina and later coached Kansas to a title. Roy Williams was head coach at Kansas for 15 years and Carolina for 18 more.

The pathway between Jayhawks and the Tar Heels was paved by legendary basketball coach Dean Smith, who has his name on the arena in Chapel Hill, North Carolina. Smith was a Kansas alum who started his coaching career there as an assistant.