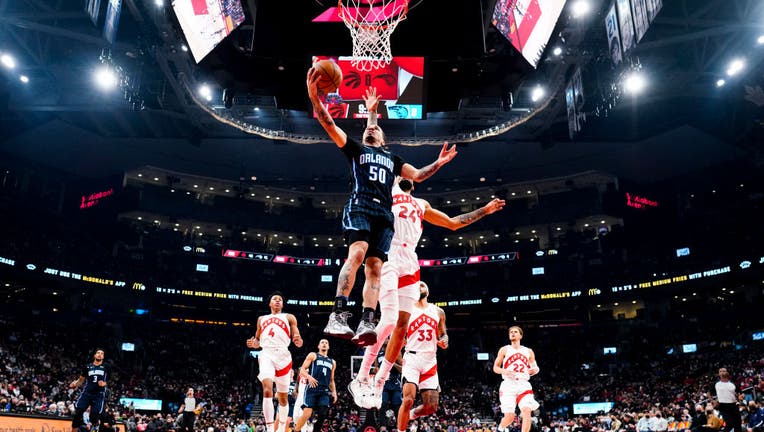 TORONTO, ON - MARCH 4: Cole Anthony #50 of the Orlando Magic goes to the basket against Khem Birch #24 of the Toronto Raptors during the first half of their basketball game at the Scotiabank Arena on March 4, 2022 in Toronto, Ontario, Canada. NOTE TO

TORONTO (AP) - Cole Anthony had 15 points and 12 rebounds, Chuma Okeke had 10 points and 11 rebounds and the Orlando Magic beat Toronto 103-97 on Friday night, snapping a nine-game losing streak against the Raptors.

Mo Bamba scored 14 points, and Jalen Suggs and Gary Harris each had 13 for the Magic. They had had lost six straight north of the border.

Franz Wagner and R.J. Hampton each scored 11 points as the Magic won for the third time in four games and bounced back after blowing an 18-point lead in Wednesday night in an overtime loss to Indiana.

The Raptors lost to a 15-win opponent for the second straight night after falling to Detroit on Thursday.

Pascal Siakam had 34 points and 14 rebounds for Toronto, and Malachi Flynn scored a season-high 20. The Raptors lost for the fourth time in six games since the All-Star break.

Toronto guard Fred VanVleet sat for the fifth time in seven games because of a sore right knee, and forward OG Anunoby missed his sixth straight game because of a fractured right ring finger. Forward Thad Young returned after missing Thursday’s game because of a non-COVID illness.

Orlando center Wendel Carter Jr. was sidelined by a non-COVID illness, while Magic guard Markelle Fultz sat out to rest his left knee. Fultz is likely to return Saturday in the second game of Orlando’s back-to-back.

The game was originally scheduled for Dec. 20 but was postponed because the Magic had too many players and staff in the health and safety protocols.

Magic: Made 15 straight free throws to begin the game before Anthony missed the first of two in the fourth quarter. They finished 20 for 21. … Suggs led Orlando with seven assists.

Raptors: Nurse said Anunoby and VanVleet will accompany the team on an upcoming six-game road trip. There is no timetable for VanVleet’s return. … Flynn matched his season-high with eight assists.

Pistons: At Memphis on Saturday night.

Raptors: At Cleveland on Sunday night.