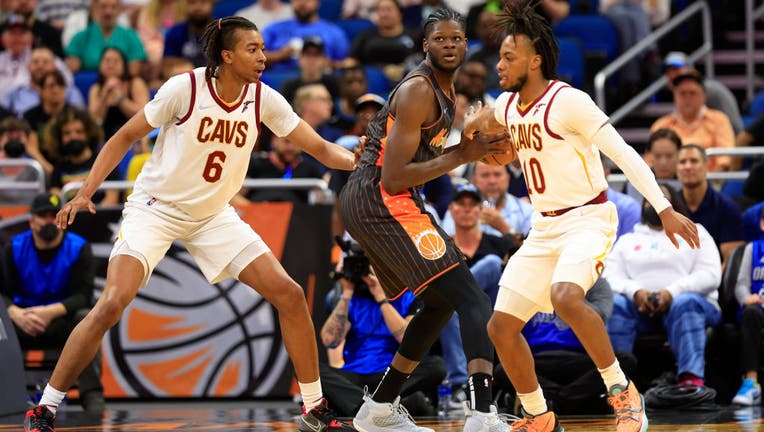 Mo Bamba #5 of the Orlando Magic posts up Moses Brown #6 of the Cleveland Cavaliers during a game at Amway Center on April 05, 2022 in Orlando, Florida. (Photo by Mike Ehrmann/Getty Images) NOTE TO USER: User expressly acknowledges and agrees that, b

ORLANDO, Fla. (AP) - Mo Bamba had 20 points and 12 rebounds, Ignas Brazdeikis scored 20 off the bench and the Orlando Magic beat the Cleveland Cavaliers 120-115 on Tuesday night to stop a six-game losing streak.

Moritz Wagner scored 10 of his 15 points in the fourth quarter for the Magic.

Darius Garland had 27 points and 10 assists, and Lauri Markkanen added 25 points for the injury-riddled Cavaliers, who have dropped eight of 10. Cleveland is trying to hold onto seventh place in the Eastern Conference with two regular-season games remaining.

Markkanen, who had 17 points before halftime, scored the final five of the first half to leave the Cavaliers with a 61-59 lead at the break.

Markelle Fultz, who finished with 16 points and six assists in his first start of the season, rallied the Magic in the third quarter. Wagner scored seven straight points early in the fourth, starting with a midcourt steal and dunk and ending with a 3-pointer with 7:17 remaining.

Bamba hit all five of his 3-point shots in the first 10 minutes to help Orlando quickly erase Cleveland’s 14-3 game-opening burst.

Cavaliers: C Evan Mobley missed his fifth straight game with a sprained ankle. He will practice Thursday and be re-evaluated. ... All-Star C Jarrett Allen missed his 16th game with a broken finger. ... Coach J.B. Bickerstaff was fined $15,000 on Monday by the NBA for criticizing officials after Sunday’s game.