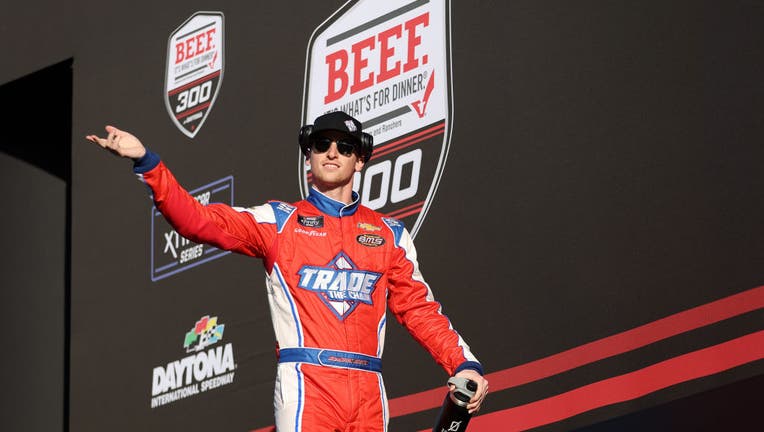 DAYTONA BEACH, FLORIDA - FEBRUARY 19: Brandon Brown, driver of the #68 TradeTheChain.com Chevrolet, waves to fans onstage during driver intros prior to the NASCAR Xfinity Series Beef. It's What's For Dinner. 300 at Daytona International Speedway on F

"Hopefully, they know it’s for me, and they’re pulling for me," Brown said.

At least not completely.

One of the most unrecognizable drivers in NASCAR is in the clutches of a swirling culture war he never asked to be part of as he quietly pursued a racing career. Take a look around the Daytona infield and the "Let’s Go Brandon" flags that dot the landscape outnumber the ones for Earnhardt and Elliott — and embody the unofficial battle cry of the sport’s right-leaning fanbase.

NASCAR denounced the slogan. The fans who turned Daytona International Speedway into a Republican rally when former President Donald Trump visited two years ago — some still gleefully recall his pace lap in the armored presidential limo called "The Beast" — have reveled in hijacking a televised faux pas as an insult directed at President Joe Biden.

Brown just wants to race. Instead, the kind of spotlight he wished would have burned out by now continues to beam right on him.

"There’s a lot of things that make me look like the enemy," he told The Associated Press before his season opened Saturday with NASCAR’s second-tier Xfinity Series race at Daytona.

The 28-year-old Brown unwittingly became entangled in this debacle when he won his first career NASCAR race in October in Alabama, and the Talladega Superspeedway crowd chanted "F--- Joe Biden" during Brown’s interview.

It was not clear if NBC Sports reporter Kelli Stavast, who was wearing a headset, could hear what the crowd was saying during the interview, and she incorrectly told Brown the fans were cheering "Let’s go, Brandon."

What should have been laughed off as a blown-over blooper somehow escalated into the fast-evolving pop-culture lexicon. Politicians shouted the phrase from the House floor and repeated the soundbite in campaign ads. Trump’s website offers ornaments, buttons and pint glasses — $29.95 for a set of two — with "Let’s go Brandon" stamped on each piece of kitschy merchandise. The souvenir shops that line Daytona’s streets sell Brandon-inspired T-shirts — none of them, of course, approved by NASCAR.

"But at the same time, my name’s out there. People know who I am now," Brown said. "There’s some reputability to that."

Brown had been relatively unknown while racing since 2014 in NASCAR’s two developmental series and had never won until Talladega. His euphoria in the aftermath dimmed as the slogan shot from meme to mainstream fodder. Brown largely stayed out of the fray.

"My goal was to stay silent and hope that it went away," he said. "Obviously, it got legs of its own and people started putting words in my mouth."

Brown granted few interviews. But he said he received "an overwhelming amount of hate" on social media as #LGB turned into a political football he wasn’t prepared to handle.

"For me, a big goal was and still is to change the narrative of what LGB means," he wrote last month in a statement. "I would like it to become a constructive voice for those like myself, who land somewhere in the middle and have views that align with both sides."

Brown drives for underfunded and undermanned Brandonbilt Motorsports team owned by his father, and the big-buck sponsorships that prop up teams in the series have been hard to find. Brown said he was determined not to capitalize on his newfound notoriety until he announced in December a full-season deal with LGBCoin. You know, a crypto coin capitalizing on the "Let’s Go Brandon" craze.

One problem: NASCAR had not approved the LGB sponsorship — even as Brandonbilt prematurely announced it.

The agreement quickly collapsed and Brown had cryptocurrency platform Trade The Chain on the No. 68 Chevrolet on Saturday.

"I mean, really, truly, it’s been kind of a whirlwind with the things that went on with NASCAR and having sponsorship denied to now," Brown said. "It’s like, all right, keep the wind in our sails, ride off that Talladega win and try and find some more primaries to take over the spots."

His career at stake, Brown is not in position to decline ever-important sponsorship dollars.

"You obviously want to stay open to any and all partnerships," he said. "You don’t want to alienate anybody you currently work with. I’ve kind of had to toe that line."

The Original Larry’s Hard Lemonade Brewing Company sponsored Brown on his Talladega car and filmed a celebratory commercial shortly after the win. Vic Reynolds, the company’s co-founder, cut ties with Brown in January in the aftermath of the LGBCoin fallout and wrote, "all money is not good money."

Reynolds was upset that his company had stood by Brown — only to be left behind in the whirlwind of confusion surrounding the LGBCoin sponsorship announcement.

"Mistakes may have been made in choosing a new sponsor instead of sticking with the companies that got him to victory lane," Reynolds said.

Without a tie to the elite teams in the Cup Series, like Team Penske or Joe Gibbs Racing, losing sponsorship would be a death knell to his career.

"We don’t want to stop here," Brown said. "We’ve got to get to the Cup Series somehow."

He walked the garage in Daytona in anonymity, the outside noise nonexistent as he plopped his helmet on top of his car and talked to his crew. There are no autograph hounds like collectors who chase Cup drivers.

But outside the fence, Brown is a folk hero.

"If I’m in the race suit, everybody knows who I am," Brown said. "If I’m in my street clothes, I’m just another guy."

Kevin Raccioppi of Deerfield Beach had an anti-Biden flag and Trump flags flying from his camping spot in the Daytona infield and said he had a new favorite driver. He had never heard of Brown until #LGB became a phenomenon. Could he recognize him?

"No, no," he said. "I did actually follow him for a bit on Instagram and see what’s going on. He doesn’t do anything political. Which is cool! He’s racing. He had nothing to do with the issue."

Chris Nogues, of Slidell, Louisiana, was among scores of fans interviewed in the Daytona infield who said the slogan was mostly good fun. Nothing personal, Brandon. But #LGB simply captured the zeitgeist of the moment in right-wing circles and resonated as a clever G-rated code to bash Biden.

"It’s just a cool, funny part of Americana," Nogues said. "It’s an expression of the frustration in the country in a fun and harmless kind of way."

But some see the slogan as a modern, Confederate-flag-type headache for NASCAR at a point in its 74-year history where the series has made critical strides in diversity.

Steve Phelps, NASCAR’s president, said the top motorsports series in the United States does not want to be associated with politics "on the left or the right." Yet its conservative ties get top billing in Sunday’s Daytona 500. Fox CEO Lachlan Murdoch is the honorary starter and Landon Cassill is driving a car fielded by Spire Motorsports and sponsored by Fox Nation.

Brown knows he won’t be able to shake #LGB, even as he tries to convince himself he can win over fans with his performance, not politics.

"Let’s go Brandon to get to victory lane."