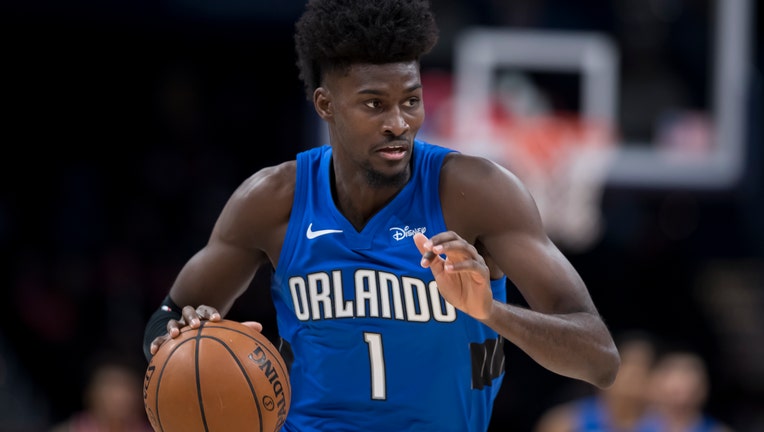 WASHINGTON, DC - JANUARY 01: Jonathan Isaac #1 of the Orlando Magic dribbles the ball against the Washington Wizards during the first half at Capital One Arena on January 1, 2020 in Washington, DC. NOTE TO USER: User expressly acknowledges and agrees

The Magic announced the decision Tuesday, meaning the earliest Isaac will play is October. He last played in August 2020, when he tore the ACL in his left knee during a game at the NBA’s restart bubble in Walt Disney World.

If the 6-foot-10 forward is ready to begin when next season starts in mid-October, it would end a rehab and recovery period that would have lasted more than 26 months.

"First and foremost, the care of our players will always be our top priority," Magic president Jeff Weltman said. "We have to remember that Jonathan has missed essentially two years. While it continues to be a day-to-day process for him as he continues to strengthen and condition all aspects of his body, we feel we have reached a point where it would be prudent to say that he will not play this season."

When this season ends, Isaac will have missed 196 of Orlando’s last 198 games, including 165 consecutively. That includes the team’s five-game playoff run in 2020.

Isaac’s major left knee problems began when he was hurt on Jan. 1, 2020, suffering a bad sprain and bone bruise. He didn’t play again until the restart at Disney. He wore a large brace to protect the knee, plus had it wrapped — and still couldn’t avoid another injury when he tore the ACL on a drive to the basket. The Magic said one injury had nothing to do with the other.

Isaac — who appeared in only 27 games as a rookie, mostly because of problems with his right ankle — was the No. 6 pick in the 2017 draft out of Florida State. The 24-year-old has appeared in 136 regular-season games with Orlando, averaging 9.3 points and 5.4 rebounds.

"I understand this can be frustrating to our fans, but Jonathan has worked extremely hard and he is eager to return to game action, which is why we must continue to manage his rehabilitation with the big picture in mind," Weltman said. "Quite frankly, we are just out of time to ramp him up to play in games this season."

Isaac is completing the first year of a four-year, $70 million contract with the Magic.