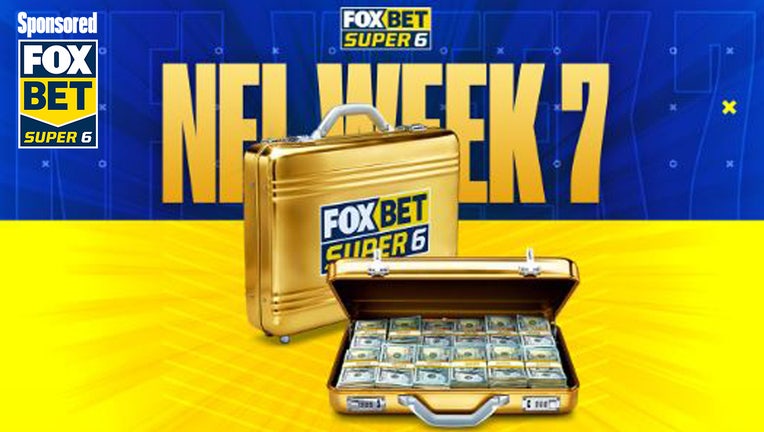 The season is flying faster than a ref's flag for a bogus roughing the passer call. And it also means that Terry's $100,000 jackpot is back for FOX Bet Super 6 NFL Sunday Challenge.

But before we get into this week's contest, we have to give props to you all — the FOX Bet Super 6 faithful. You are the real MVPs. All season long, you've been making your picks every week, tagging us on social media and coming close to winning.

And in Week 4, it happened! A few of you guys actually did win a piece of the million-dollar prize. Love to see it!

This week, it's all about seeing how well your picks measure up to ours. If you're new here — suit up and get ready for action.

FOX Bet Super 6 is a free-to-play contest where you pick the winners of all six marquee games with their margins of victory for a chance to win $100,000 in our NFL Sunday Challenge. Just download the FOX Bet Super 6 app on your phone or mobile device, make your picks and submit your selections before Sunday's games kick off.

It's that simple, it really is free and it's so much fun.

And when we say we're rooting for you, we really do mean it. So make your picks after you finish reading ours. Then let's see how all of our predictions measure up.

Raise your hand if you had Baltimore sitting at .500 at the end of October on your bingo card. Not one hand raised, right? That's because fans and bettors expected so much more from quarterback Lamar Jackson & Co.

But you can book Baltimore getting back on track against the Browns this weekend.

Two of B-More's losses — against the Bills and the Giants last week — were close games that could have easily ended in Ravens wins. So the Ravens aren't as mediocre in real life as they are on paper.

Baltimore has had double-digit leads in every game this season, so we know the Ravens can take command of their matchups. Finishing the drill is where they've struggled in those three losses.

Furthermore, the Baltimore Birds are at home and favorites this weekend. Under head coach John Harbaugh, the Ravens are 29-14 straight up (SU) when playing host to AFC North opponents. And since 2010, the Browns have gone 5-19 SU when facing the Ravens.

Cleveland's Nick Chubb might be a problem for the Ravens defense. The running back's 649 yards on the ground lead the league in rushing. His seven touchdowns are also an NFL best. But the Ravens' John Harbaugh is 51-34 SU against AFC North opponents in his head coaching career. He knows how to win within the division.

In 2021, these two teams split the season series, with the home team winning both games. We're trusting Lamar to lead his squad to a W at home this weekend. But we don't trust them to cover and that's because the Ravens are 2-3-1 against the spread (ATS) this year.

Here's another one. Raise your hand if you had Tampa Bay sitting at .500 at the end of October on your bingo card. Exactly. No one saw this one coming.

At the beginning of the season, FOX Bet had Tampa Bay's odds of winning the Super Bowl at +800. Now those odds have lengthened to +1000. A 3-3 record and lack of chemistry on both sides of the ball will definitely lengthen your Lombardi chances. But the Bucs face the 1-5 Panthers in Week 7, so this game has got to be a gimme for TB, right?

If not, it's time for Tom Brady to retire.

The only thing the Panthers have done right this season is fire head coach Matt Rhule. Not only is Carolina 1-5 overall, but they're 1-5 ATS. Carolina also ranks 32nd in total offense. That's a polite way of saying dead last.

Since 2010, the Bucs have beaten up the Panthers, winning eight out of 12 matchups. As a matter of fact, Tampa Bay has won four straight over Carolina, and in each of those four games, the Bucs won by at least 14 points.

The line at FOX Bet is Bucs -10.5, which makes sense considering the history between these squads. But the Bucs haven't played up to expectations, so this win they get in Carolina on Sunday will be closer than expected.

"The South got something to say," said ATL. And the Falcons really did say something with a statement 28-14 win over San Francisco in Week 6. The Falcons were 4-point underdogs against a San Francisco team that was on a two-game winning streak. Atlanta now sits at 6-0 ATS — the first time that has happened in the franchise's history.

Now the Falcons face a Bengals team that sneaked past the Saints last week 30-26. With both teams coming off wins, which squad gets the W this week?

At FOX Bet, the Bengals are favored by 6.5 points. So like the oddsmakers, we're going Stripes over Birds.

Cincinnati QB Joe Burrow is just too cool against opponents at home when his team is the favorite. He's 5-3 SU as a starter in those situations. And since 2014, the Bengals have dominated the NFC South, going 6-2-1.

Atlanta is pretty cool, too, to be honest. In Week 6, the Falcons had three different players rack up 50 or more rushing yards. And that tracks because ATL's rushing offense ranks third in the league.

So yes, put some respect on the Falcons' name but let's not get too carried away. The Bengals will protect their home turf and get the W against the A like they did the last time these two met back in 2018.

Could the Mannings be right? Could NY QB Daniel Jones be all they hyped him up to be? He has led four game-winning drives this season which leads the NFL.

So it looks like Jones might be worth the price of admission. And it looks like the Giants are about to storm down to Duval and get to 6-1 for the first time since 2008.

We're high on New York in this game but not just because of Jones. Running back Saquon Barkley has also been a huge part of NY's offense. Bark leads the league in yards from scrimmage with 771.

Going back to 2018, the Jags are 0-18 in non-conference games, so the NFC East Giants have another leg up there. While Trevor Lawrence and Jacksonville have shown promise that they're a better team this year than last, they've still gone 2-4 ATS and 2-4 SU on the season.

We're going to sound like a broken record, but who would've guessed the Packers would start the season 3-3? Not with Aaron "Back-to-Back MVP" Rodgers at the helm! But on second thought, since GB lost its top receiver Davante Adams to the Raiders, maybe Green Bay's record is more believable than the Bucs' and the Ravens'. But still — losing 27-10 to the Jets ... at Lambeau

Not only did the Packers lose to the Jets, their loss the week before to the Giants meant that Green Bay lost back-to-back games for the first time under coach Matt LaFleur. A Week 7 loss to the Commanders would mean the Cheeseheads lose three straight for the first time since 2018.

Green Bay's Rashan Gary has racked up six sacks this season which is tied for second-most in the NFL. Also, the Packers lead the NFL in passing defense. While Aaron Rodgers has been held to fewer than 300 passing yards in every game this year, the Pack defense will hold the Commanders and their 29th-ranked offense from getting a win.

Prediction:
Packers by 8 to 10 points

Patrick Mahomes and Jimmy Garoppolo: The tale of two QBs who met once upon a time in Super Bowl LIV. That was the last time these two teams faced off. And in case you missed it, the Chiefs took that one, 31-20.

In this one, Kansas City is favored to win again but by 3 points. Can the Chiefs win two straight against the Niners?

KC is 26-12 SU as a 2- to 4-point favorite under Andy Reid. On the other hand, the Niners are 7-9 SU when they're home under underdogs under Kyle Shanahan.

KC's Travis Kelce leads the NFL with seven receiving TDs this year. The 49ers have the NFL's best total defense.

Really, this is a tale of two teams taking care of business on both sides of the ball.

However, we give the edge to the Chiefs in this one. They are 34-11 SU and 14-1 in their last 15 non-conference games as road favorites under Andy Reid.

Patrick Showtime Mahomes & Co. get by San Fran in Week 7.

Now, it's your turn.

After you download the app and submit your selections for the upcoming contest, share your picks with us by tagging @FOXSuper6 and @EricaReneeD and use the #EricaSuper6 hashtag across all social media platforms.