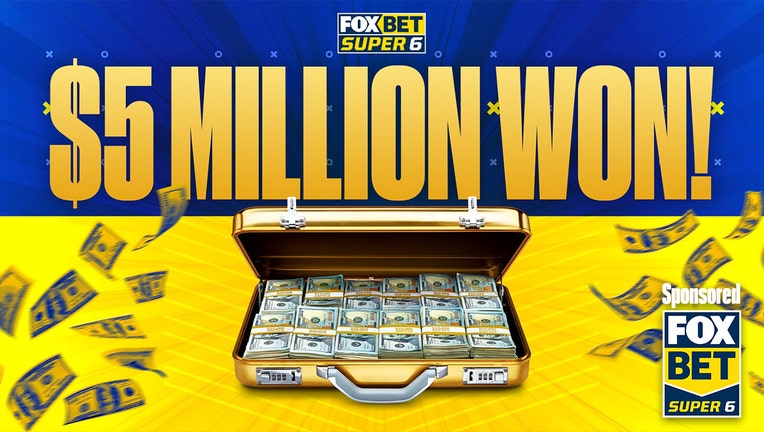 That six-figure jackpot raised the total amount of money given away by FOX Bet Super 6 to over $5 million. From Sunday NFL Challenges to weekly NASCAR contests and the latest "Stack the Cash" college football promotion, no matter what your favorite sport is, FOX Bet Super 6 has you covered with a chance to win gobs of cash absolutely for free.

Since its inception, FOX Bet Super 6 has seen dozens of winners, like Paula Hotchkiss, who won the $100,000 jackpot last season the very first time she played Super 6!

And a mountain of dough isn't the only thing FOX Bet Super 6 has given away over the years. Some of the biggest promotions include not only cash but awesome prizes like a brand-new Ford F-150 truck or a Camping World RV.

FOX Bet Super 6 is a free-to-play game in which you are asked to answer six questions about an NFL weekend, an MLB game, a NASCAR race, and sometimes, even quizzes about pop culture and current events!

For example, if you're playing the weekly million NFL contest, you'll be asked to pick which team will win and by how many points in six games from the NFL Sunday schedule.

If you get all six questions right, congratulations! You're a grand-prize winner – joining the ranks of our winners who, again, have stacked up over $5 million in prizes.

Ready to get into the game? You'll probably want to check out this week's college football "Stack the Cash" contest, where the more people who enter, the higher the grand prize rises. Last week, the jackpot started at $25,000 before climbing well over $100,000 – and we're on the way to an even bigger prize in college football Week 6.

One last thing – if you've played Super 6 before, make sure you update your app! The FOX Bet Super 6 product is new and improved for this football season, with a redesigned lobby, a scores page featuring odds for the top games in sports, the ability to filter between contests you've entered and those you haven't, the ability to compete against your friends and much more!

It's all in the FOX Bet Super 6 app! Download and start playing today.