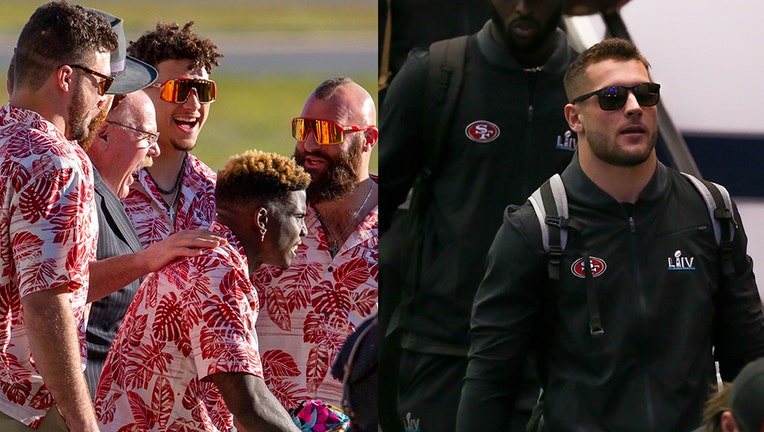 MIAMI - Kansas City waited 50 years to get back to a Super Bowl. And then the Chiefs had to wait a few extra minutes once they got to Miami.

It took workers at Miami International Airport about three attempts to get one of the rolling staircases that the Chiefs would use to deplane properly lined up with the front door of their chartered jet. The delay was brief, and coach Andy Reid and the rest of the Chiefs’ delegation to make their way into the hangar for the short walk to waiting buses.

A handful of local politicians and officials were at the airport to greet the teams, as loud hip-hop music blared through the maintenance hangar that was being used for the arrivals.

No players or coaches spoke to reporters inside the hangar. The first media session for the Chiefs and the San Francisco 49ers — who arrived a couple hours after the Chiefs did on Sunday — is Monday night, when the NFL has Super Bowl Opening Night at Marlins Park.

Super Bowl 54 is next Sunday at Hard Rock Stadium in Miami Gardens.

Even as football enters its biggest week, basketball was on the teams’ minds. The teams both paid tribute Sunday on social media to Kobe Bryant, whose shocking death in a helicopter crash earlier Sunday reverberated around the world.

A handful of volunteers greeted players, coaches and staff as they made their way down the stairs. Everyone was handed a floral baseball cap, and many players held their phones out to shoot video of the moment they arrived at the Super Bowl.

A few of the 49ers danced once they deplaned, in time with the music coming from a nearby DJ. Even the flight attendants on the Chiefs’ flight were celebrating the moment— they gathered at the top of the stairs for a group photo once their passengers deplaned, and then a few of them pulled out their phones for some pictures of players as well.

Super Bowl LIV will air on FOX with coverage starting at 6:30 p.m. on Sunday, February 2. FOX 35 News will also have special coverage that morning starting at 7 a.m. on Good Day Orlando.