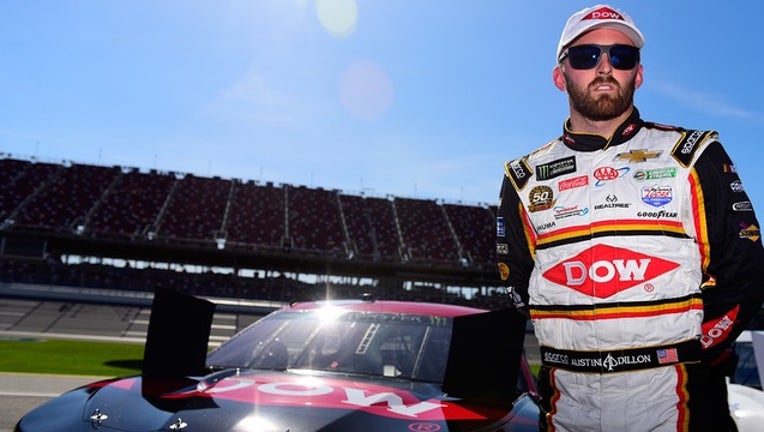 TALLADEGA, Ala. (AP) - Austin Dillon will start on the pole at Talladega Superspeedway. What happens from there is anybody's guess.

Even by Talladega standards, there's an element of mystery and potential for chaos heading into Sunday's Cup series race, which is often marked by big wrecks and late dramatics.

"I mean, Talladega is the unpredictable," five-time Talladega winner Brad Keselowksi said. "It's a lot of what defines it, a lot of the allure of it. It's always been a bit of a mysterious track. The odds here are higher than anywhere else. It's hard to quantify, and I would say with everything that continues to change and how dynamic it is with the rules and the cars and the drivers, there's very much an opportunity for that again."

NASCAR has replaced the horsepower-sapping restrictor plates that have been fixtures at Talladega and Daytona for two decades. The cars have tapered spacers and the height of the rear spoiler has been raised, and NASCAR even tweaked the cars in between Friday practice sessions trying to slow them.

The second practice session was even faster with six cars reaching 204 mph and two dozen topping 200.

Dillon led qualifying at 192.544 mph but speeds increase during the race on the long, banked oval.

Drivers seem uncertain about what exactly to expect - even more so than usual at the 2.66-mile track

Keselowski said he expects the race to look "a lot like a truck race that's 500 miles."

Then he added, deadpan: "Perhaps with a little higher attrition."

The buzz has been about the high closing rates and the potential hazards of moves to block cars from passing.

Clint Bowyer, who qualified third, feels that's where the trouble could come with an ill-timed block.

Bowyer sees the possibility with cars closing fast that "they're just going to flat run over you. They ain't going to be able to stop."

On Saturday, Dillon celebrated his 29th birthday by earning his second pole of the year.

"I definitely don't want to give up that front position, but the front guy seems to be a little bit of a sitting dunk. There'll be a lot of movement on the track. Hopefully it's good movement and not cars going the other way."

Aric Almirola, who won at Talladega in October, qualified second, followed by Bowyer, Keselowski and Daniel Hemric. Running up front is a good way to avoid the seemingly inevitable mayhem but Ricky Stenhouse Jr. was the last pole winner to start and finish up front. His victory in the 2017 spring race snapped a 10-year drought in that regard.

Whatever Sunday's race brings, Erik Jones has a prediction that rings of truth.

"You can get really big runs. When I fell back and joined the pack, I was able to fall way back and get a big run to the pack so it's going to make it pretty interesting."

Team Penske is seeking its sixth win in the last eight Talladega races. Ford drivers have won seven straight at the track and did have the next three qualifiers behind DIllon.

Admittedly Kyle Busch has set a high bar from himself, so the "not" is relative. But he qualified 22nd after finishing eighth at Richmond. Busch has won three times already in 2019 but Talladega hasn't always been kind to him. He has one win in 27 races at Talladega and that came in April 2008. In the last six, he has two top 5 finishes but also has been 26th or worse three times.

Kurt Busch will be without his car chief Ryan Bergenty, who was ejected by NASCAR after his car twice failed inspection. Busch loses 15 minutes of practice time at Dover next week. He missed advancing from Round 1, qualifying 14th. Dillon's team also faces possible penalties following the race after NASCAR confiscated the rear deck lid of his car for non-compliance.