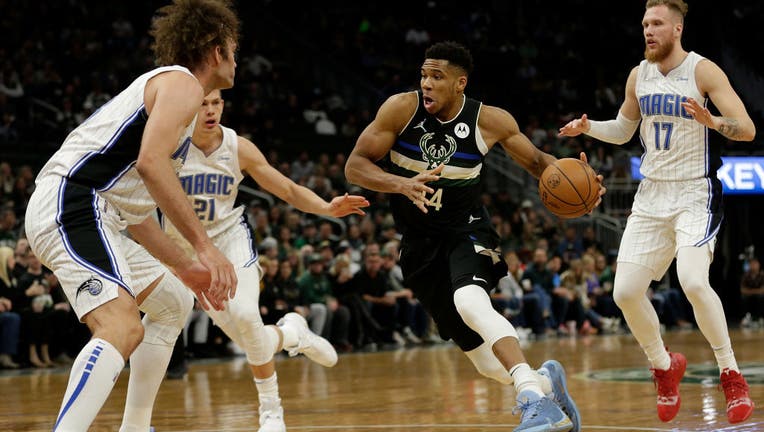 MILWAUKEE, WISCONSIN - NOVEMBER 20: Giannis Antetokounmpo #34 of the Milwaukee Bucks drives to the basket during the second half of the game against the Orlando Magic at Fiserv Forum on November 20, 2021 in Milwaukee, Wisconsin. NOTE TO USER: User ex

MILWAUKEE (AP) - Giannis Antetokounmpo had 32 points and 20 rebounds and the Milwaukee Bucks held off the Orlando Magic 117-108 on Saturday night to open a two-game set.

The teams will meet again Monday night in Milwaukee.

Bobby Portis had a season-high 24 points along with 15 rebounds to help the Bucks win their third straight and improve to 9-8. They're above .500 for the first time since they were 3-2 on Oct. 27.

R.J. Hampton had 19 points off the bench for the Magic. Jalen Suggs added 14, and Chuma Okeke had 13. Orlando lost for the fifth time in six games to fall to an East-worst 4-13.

Orlando played without leading scorer Cole Anthony, who sat out after spraining his right ankle on the final play Friday night game against the Nets in Brooklyn. The second-year player is averaging 19.6 points.

The Bucks appeared to pull away for good early in the third when Antetokounmpo and Portis connected on back-to-back 3s. Antetokounmpo followed with a twisting layup, Portis made another 3, and Khris Middleton hit a jumper from the wing to give Milwaukee a 25-point edge. The Bucks would lead by as many as 29 in the quarter and held a 96-71 margin heading to the fourth.

Bucks: F Semi Ojeleye sat out with right calf soreness. … F Rodney Hood, who has been dealing with a sore right hamstring soreness, was cleared to play right before game time.