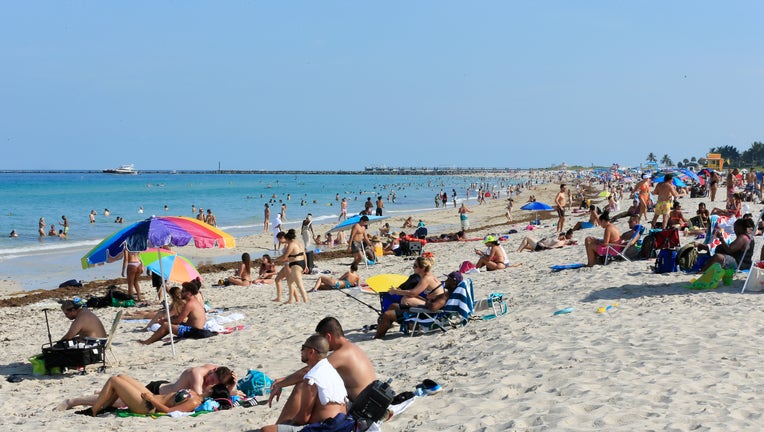 Beachgoers take advantage of the opening of South Beach on June 10, 2020 in Miami Beach, Florida. (Photo by Cliff Hawkins/Getty Images)

ST. PETERSBURG, Fla. - In parts of Florida, people under the age of 35 are testing positive for the coronavirus at a higher rate since the pandemic began, contributing to a recent surge in the number of cases in the state, officials said Wednesday.

Because of this, some mayors are considering tightening restrictions on places where younger folks gather — namely, bars and restaurants. St. Petersburg Mayor Rick Kriseman said he would make an announcement Wednesday afternoon regarding safety protocols for residents.

“This is happening statewide. Ideally we would have leadership from the top and this would be a statewide decision,” Kriseman said, adding that Republican Gov. Ron DeSantis has “encouraged” people to use masks, and not “mandated” them. Pinellas County officials are scheduled to meet later this week to discuss further social distancing measures.

Kriseman said the percentage of positive tests compared to the number of tests performed has been steadily increasing, which he attributed to higher community spread since people started socializing more over Memorial Day weekend.

St. Petersburg is the state’s fifth largest city and the largest in Pinellas County, where a third of the coronavirus cases have been diagnosed in the past week alone.

Officials in Seminole and Hillsborough say the numbers of cases are on the rise. Statewide, Wednesday was the 15th consecutive day where new recorded cases topped 1,000. Tuesday saw a record setting 2,783 new cases.

At least some of the increase reflects expanded testing especially among people who are younger and without symptoms. But the rate of positive tests also has been ticking upward in recent days, raising alarm.

As of Wednesday, Florida has reported 80,109 positive tests out of 1,460,309 tests conducted since the pandemic began, giving a positivity rate of 5.5%, according to the COVID Tracking Project. But rates have increased over the past two weeks from about 4% to about 7%.

Although Florida’s outbreak with just over 3,000 deaths has been less severe than in many states — per capita, about 27th and more than 10 times less deadly than in New York — it is now about 15th in the country in new daily cases per capita.

Pinellas County Commissioner Ken Welch said initially the county’s cases were in assisted living facilities and nursing homes. Now the numbers have shifted to younger people. He said 25% of cases are in the African American community.

“It is really becoming a community spread,” he said.

Welch and Kriseman, who are both Democrats, lay the blame on DeSantis and Republican President Donald Trump. Kriseman said DeSantis cites “guidance” from the White House. “What guidance? There is none.”

The increase in cases is a concern as central Florida theme parks either have reopened, or are days away from reopening. The Republican National Committee also plans to hold a Trump nomination celebration in Jacksonville in late August.

DeSantis said Tuesday he has no intention of reclosing Florida’s economy despite the spikes in new cases, saying many of the newly detected are young and healthy and unlikely to suffer serious illness or death.

DeSantis said much of the two-week spike in confirmed infections that pushed the daily total past 2,700 Tuesday can be traced to hot spots such as farm labor camps or businesses where a few positive cases led to widespread testing that uncovered high percentages of asymptomatic or barely symptomatic cases.

MORE NEWS: 16 people test positive for coronavirus after night out at Florida bar

Some new cases have been traced to reopenings of bars. In Jacksonville, a health care worker says she became sick with COVID-19 and 15 of her friends tested positive for the virus after they spent a night out at a bar.

Erika Crisp, 40, said she and her friends had stayed home for months and practiced social distancing, but on June 6 they went to a crowded pub and did not wear masks or stand apart.

“I think we were careless and we went out into a public place when we should not have,” she told WJXT-TV. “The state opens back up and said everybody was fine, so we took advantage of that.” Crisp did not immediately respond to a Facebook message from The Associated Press.

In Palm Beach County, officials are debating whether to require masks in grocery stores and other public places after its cases spiked like most of the state. Wearing a mask in public indoor spaces is recommended but not required in most of Florida.

County Commissioner Greg Weiss, who is pushing for the requirement, told a meeting this week, “The numbers are going in the wrong direction.” But Commissioner Hal R. Valeche opposes the requirement, saying an uptick would be expected but hasn’t reached the severity to “take take a step like that.”

The commission will consider masking next week.