WASHINGTON (AP) - Neither Civil War nor Great Depression nor any other national crisis has pushed the House to allow lawmakers to vote by proxy — without being “present,” as the Constitution requires. That's about to change during the coronavirus pandemic.

The House approved Friday a package of historic rules changes so Congress can keep functioning even while it's partly closed. The shift will dramatically change the look, if not the operation, of the legislative branch — launching a 21st century WFH House, like others, “working from home."

"This House must continue legislating," Rep. Jim McGovern, the chairman of the House Rules Committee, said during a lengthy session ahead of the vote. "And we have to do so in a way that is safe for all those around us.”

Debate over the changes has been fierce. As President Donald Trump encourages Americans back to work, the 435-member House has stayed away due to health risks while the smaller Senate has resumed operations. 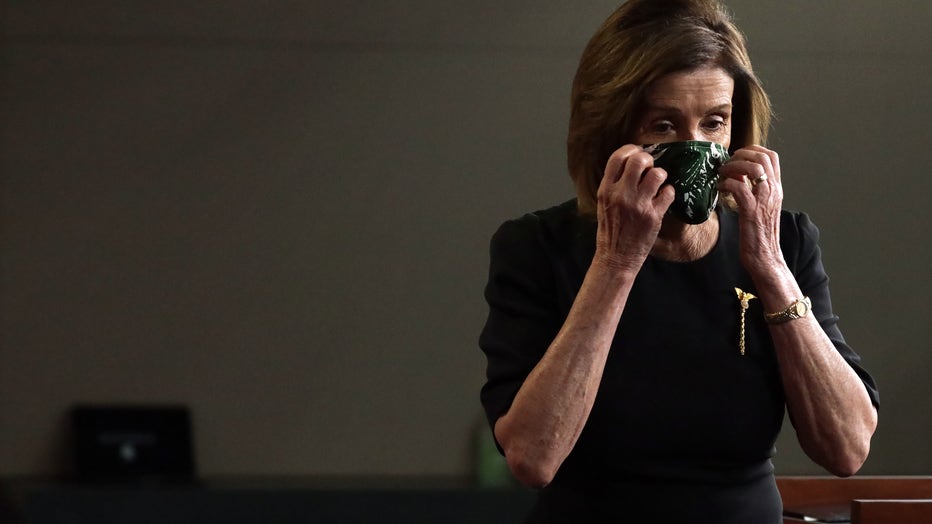 FILE - Speaker of the House Rep. Nancy Pelosi (D-CA) put her mask on after a weekly news conference at the U.S. Capitol May 14, 2020 in Washington, DC. (Photo by Alex Wong/Getty Images)

Democrats argue the House can rely on technology for remote work as the pandemic drags on. But Republicans objected to what they see as a power grab during the crisis. The vote was 217-189.

Rep. Tom Cole of Oklahoma, the top Republican on the rules panel, warned the changes will fundamentally alter the nature of the institution, “and not for the better.”

One by one Republicans lined up Friday to speak against it.

“We should all get to Washington, do our jobs,” said Rep. Bradley Byre, R-Ala.

Under the new rules, House lawmakers will no longer be required to travel to Washington to participate in floor votes. They will be allowed to vote by proxy — assigning their vote to another lawmaker who will be at the Capitol to cast it for them. Eventually, a provision allows for direct remote voting, once the technology is approved.

Just as important, the House committees — the bread and butter of legislative work — will be able to fully function remotely. Committee hearings are prime-time for lawmakers — the chance to grill officials, spar with colleagues and have much of it captured on C-SPAN. House lawmakers will be able to draft bills, conduct oversight and even issue subpoenas from the comfort of their homes.

“This is about allowing the people's House — and the people's representatives in committees — to work,” Majority Leader Steny Hoyer, D-Md., who has helped lead the effort, testified before the Rules Committee.

With the Capitol physician warning it could be years before Congress resumes full operations, lawmakers are anxious to chart a new normal and not be sidelined.

An earlier proposal was shelved two weeks ago as House Speaker Nancy Pelosi insisted she wanted any change of this significance to be bipartisan. She tapped a task force to try to reach a bipartisan compromise.

House Minority Leader Kevin McCarthy proposed a “hybrid” plan that would allow the committees to conduct work remotely but stopped short of allowing the proxy voting on the floor.

These droplets can be dispersed to a fairly large radius and can linger in the air for up to 14 minutes, and in some instances even longer.

A key Trump ally, McCarthy argues if other Americans are at work, Congress should be, too. “It’s a very sad day inside this House,” the California Republican said. He mocked Pelosi for having claimed the House would serve as the “captain” of the ship, last to leave during the crisis, only to go home.

The changes are expected to be temporary, only through the remainder of this session of Congress, at the end of the year. Democrats insist the changes should be used only under times of crisis.

But Republicans warn there will be legal challenges to legislation passed during this period, questioning the constitutional legitimacy of proxy votes. The House has never allowed proxy floor votes, even during some of the most challenging eras in the nation's history. Lawmakers convened during the 1918 Spanish Flu epidemic and only stayed away a short time after the 2001 terror attacks. Proxy votes had been allowed in committees, but that ended decades ago. Under the new rules, one lawmaker can carry up to 10 votes by proxy to the Capitol.

But Hoyer, quoting President Abraham Lincoln, told his colleagues, "We must act and think anew."