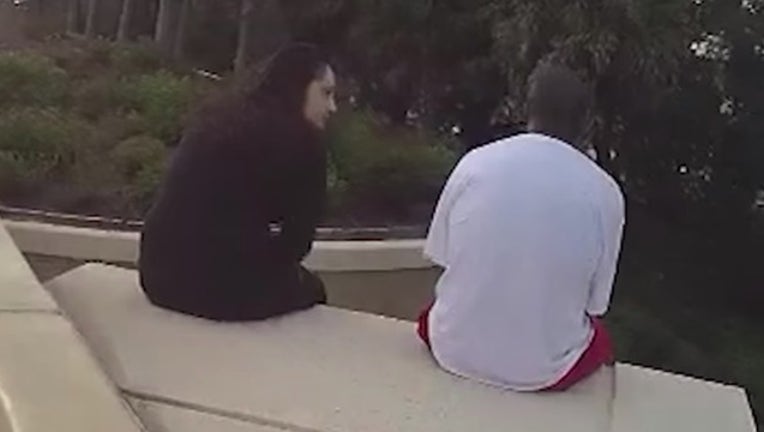 ORLANDO, Fla. (FOX 35 ORLANDO) - A woman helped stop a man from taking his own life by reciting the lyrics of a Linkin Park song.

The Orange County Sheriff's Office said that they received several calls about a man sitting on the overpass of State Road 408.

They said that hundreds of motorists continued to drive past the man except for one: Cristina Settani. She stopped, backed up, got out of her car, and went over to the man.

"I stopped because I've been where he was. So, I know what it is like to stand on the ledge and think that this is your only option. He needed someone to show that somebody cared enough to stop. And enough to tell him that he didn't need to do that today," Cristina told the Orange County Sheriff's Office.

Cristina reportedly stayed with the man until a deputy could arrive.

"There was a moment he moved forward and I did kind of moved towards him, like 'nope, you go, I go," she recalled to authorities.

To comfort the man, Cristina reportedly recited a song lyric from one of her favorite bands, Linkin Park. The song lyrics said "who cares if one more light goes out? Well, I do."

She said that "I don't know if it clicked with him, but he just cried."

The Orange County Sheriff's Office said that Deputy Shaun Cayer soon arrived and saw Cristina and the man on the overpass together. He walked up to them and asked the man how he was. He went on to tell the man "do me a favor. Come on back with me, okay?"

The man however was reportedly not getting off the ledge, so Deputy Cayer grabbed him and pulled him back. He soon learned that the man had made some bad decisions and let his family down. He thought his only course of action was to end his life.

"Well, you gotta just keep trying man. Think of what this is gonna do to your mama if you actually went and hurt yourself. She'd feel a lot worse," the deputy told the man.

The man was soon taken to a mental health facility.

"Everyday I think about him," Cristina told authorities.

"Hopefully he took that as a sign and opportunity and just kept on going," Deputy Cayer said.

To watch the Orange County Sheriff's Office video about this situation, watch below.

Click here for the warning signs and risk factors of suicide. Call 1-800-273-TALK for free and confidential emotional support.