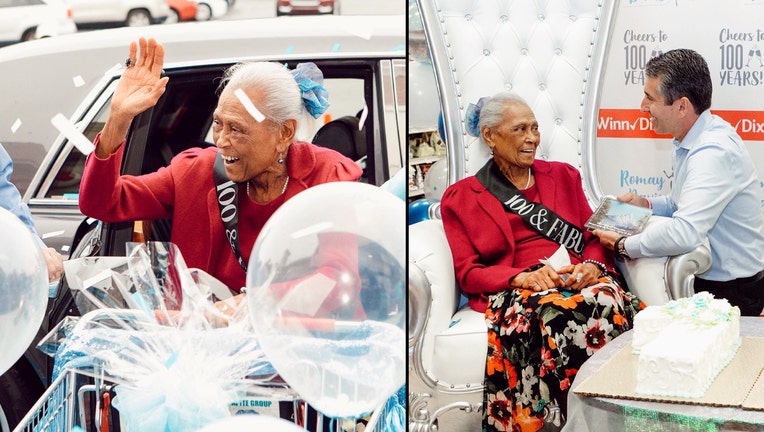 MONTGOMERY, Ala. - A Winn-Dixie store in Alabama threw a lavish birthday party for their oldest employee, who just turned 100 years old.

The grocery chain's parent company went all out to celebrate Romay Davis' big day, starting with a chauffeured ride to the store in a Rolls Royce.

When she stepped out of the luxury sedan into the Winn-Dixie parking lot, she was showered with ticker tape as a band played music to greet her.

She then got to walk the red carpet, sitting on an ornate chair next to a backdrop that said "Romay Davis, Cheers to 100 Years!"

WSFA reports Winn-Dixie gifted her one year of free groceries, and the city of Montgomery proclaimed Oct. 29 as "Romay Davis Day."

Davis has lived an adventurous life. After high school, she joined the U.S. Army and served in World War II. She earned a degree in education from New York University, and had a career in fashion, making clothes for women and children.

At the age of 70, she earned a black belt in Tae Kwon Do, according to WSFA.

Davis has worked at the grocery store in Montgomery since 2001. She applied at the age of 81 shortly after her husband passed away, and has been at the store ever since.

She works at the supermarket 20 hours a week, and has no plans of stopping anytime soon.

"They're going to have to push me out," she jokingly told the station.