Federal wildlife officials are examining evidence of a possible drone crash into a bald eagles nest in Ardenwood Historic Farm in Fremont. KTVU's Jana Katsuyama reports the birds' offspring may have been injured.

FREMONT, Calif. - Federal wildlife officials are examining evidence of a possible drone crash that might have hit a nest of two bald eagles, possibly injuring the offspring.

Residents near Ardenwood Farm in Fremont took note of their new neighbors months ago, when the eagles first settled in a nest high up in a eucalyptus tree.

"We noticed this beautiful nest they been working on it since last year, every day they came back and make it bigger and stronger," said Virginia McCoy, a Fremont resident who has been watching the eagles for months.

McCoy's friend, photographer Dan Sarka, captured images of the pair of majestic eagles with his camera. 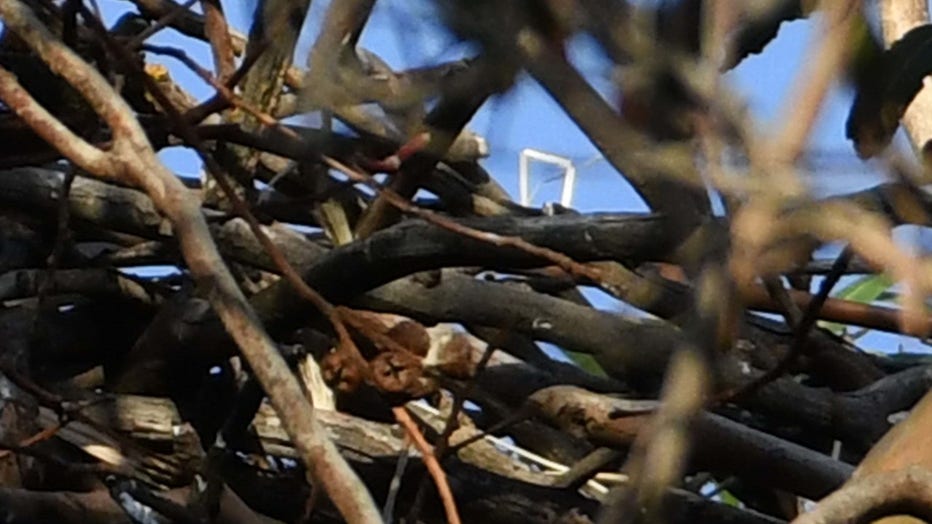 "They're so devoted to each other," said Dan Sarka of Union City, "They're working almost continuously building their home and going to the lake to capture food, so their survival is at stake."

The eagles were nesting, but on April 20, that suddenly changed.

"We noticed on the 20th that the eagles were very agitated, more than usual. And they were just flying all over the place," said McCoy.

Sarka looked over his photos of the nest and then noticed something strange. Something white tangled in the nest appeared to be a possible part from a drone.

Doug Bell, who holds a doctorate in zoology is the wildlife program manager at the East Bay Regional Park District.

"It was just shocking. It's something that should not happen," said Bell.

Bell alerted the Federal and State Departments of Fish and Wildlife. He says until April 19th,  the eagles had appeared to be caring for young.

"The two adults were attending the nest. They were switching out and were brooding eggs or a small chick," said Bell, "If there were young chicks in the nest and the drone was keeping the adults away, they could be close to starvation." 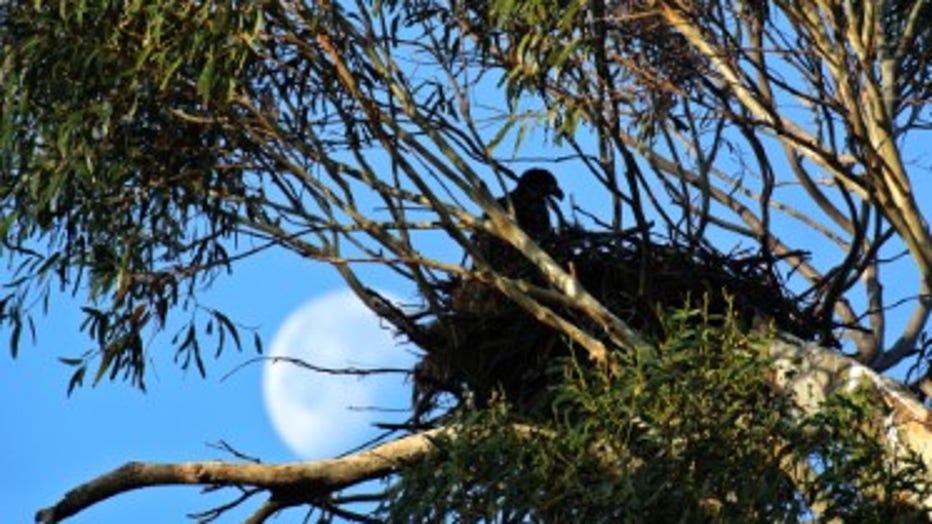 Bell says drones are banned from all their parks.

Although bald eagles are no longer on the federal endangered species list, they are still on California's endangered list and have other federal protections.

"It still falls under the Bald and Golden Eagle Protection Act," said Bell, who adds that violators can face a fine of up to $100,000 and one year in jail.

Bell says it is devastating to have the breeding disrupted.

"We're really looking at a 6 to a 9-month period from courtship until a fledgling," said Bell, "They basically have one shot a year at this."

"My husband and I have been outside and have seen drones flying around several times when we're here," said Beverly Angeles, a Fremont resident who lives in the neighborhood near the eagle nesting site at Ardenwood Farm, "I'm devastated that this happened."

The nest was situated too high even for a professional tree climber to access, so the parks district had to use a professional drone operator to get a look inside the nest Wednesday.

The initial images appear to show an empty nest, adding to the mystery of what might have happened to the eagles' eggs or chicks. Investigators are analyzing the photos.

Bell says if they do find a drone operator is to blame, that person could face penalties of a fine up to $100,000 and up to one year in jail.