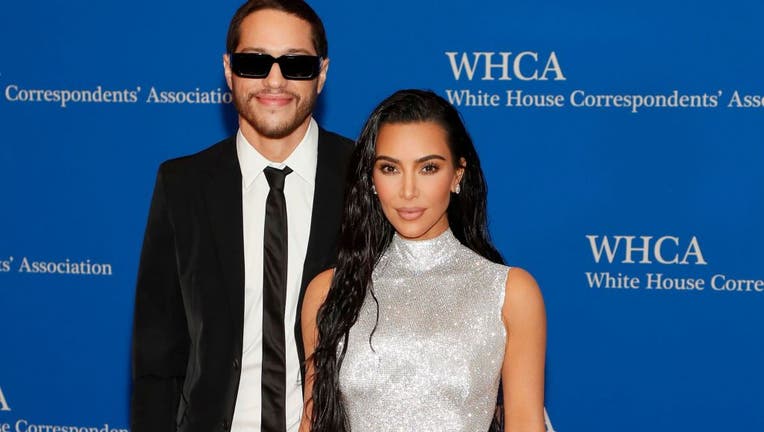 WASHINGTON (AP) - In a return to some normalcy, journalists, government officials and celebrities paraded down the red carpet Saturday night at the annual White House press corps gala even as the threat of COVID-19 loomed over the massive hotel ballroom.

The White House Correspondents’ Association dinner, which the pandemic sidelined in 2020 and 2021, returned with Joe Biden as the first president in six years to accept an invitation. Donald Trump shunned the event while in office.

Comedy was also back with "The Daily Show" host Trevor Noah as the headliner. Celebrities were reappearing as well: Kim Kardashian and Pete Davidson walked the carpet as did Brooke Shields and Caitlyn Jenner. The event drew a large swath of government officials and other prominent figures.

Biden will be facing more than 2,600 attendees while he tries to strike a careful balance at a pivotal moment for the country. His administration is looking to turn the page on the pandemic even as the virus remains a threat nationally and close to home. Vice President Kamala Harris tested positive this week and Dr. Anthony Fauci skipped the dinner for health precautions.

After the recent Gridiron Club press dinner in Washington, dozens of attendees, including members of Congress and of Biden’s Cabinet and journalists, tested positive for COVID-19.

The White House announced Vice President Kamala Harris has tested positive for COVID-19. In a statement, officials say Harris has not been in close contact to the President or First Lady due to their recent travel schedules.

That raised questions about whether the 79-year-old Biden should attend Saturday’s dinner. The president planned to pass up the meal but turn up later for the program. He also planned to be masked when not speaking.

The White House has stressed the abundance of the antiviral pill Paxlovid, which has been shown to reduce by 90% severe outcomes from the virus among those at highest risk.

Still, press secretary Jen Psaki has said of Biden, "We want to be very clear that it is possible he could test positive for COVID, just like any American."

The White House Correspondents’ Association said it was requiring same-day antigen testing for its dinner attendees even before the Gridiron outbreak. It then added a vaccination requirement.

The U.S. is experiencing a COVID-19 case spike from a highly contagious subvariant of omicron, with confirmed infections rising to about 44,000 per day, up from 26,000 a month ago.

Despite the latest wave of COVID-19 cases, virus deaths and hospitalizations are near, or at, pandemic lows, with the BA.2 variant proving less severe than earlier virus strains. Just over 300 people are dying in the U.S. each day from the virus, down from more than 2,600 daily earlier this year — with about 1,600 hospitalizations per day, declining from a peak of more than 21,000 daily in January.

Psaki said Biden’s decision to attend "does stand in stark contrast to his predecessor, who not only questioned the legitimacy of the press on a nearly daily basis, but also never attended the dinner." Trump, who at times branded the media "the enemy of the people," had gleefully boycotted the event as president.

In addition to the looming threat of the virus, Biden planned to take the mic as a massive and deadly invasion of Ukraine continued to unfold at the hands of Russian forces.

Biden mentioned the dinner during a speech this past week about Russia’s war on Ukraine, saying, "I’ve always had respect for the press, but I can’t tell you how much respect I have watching them in these zones where they’re under fire."

"Imagine if we weren’t getting that information," the president added. "It would be a different world."

The correspondents’ dinner debuted in 1921. Three years later, Calvin Coolidge became the first president to attend and all have since, except Trump. Jimmy Carter and Richard Nixon opted not to attend every year of their presidencies, however, and Ronald Reagan, then recovering from an assassination attempt, missed the 1981 installment — but called in from Camp David.

"The thing I think this shows is the restoration to the health of the relationship," said Harold Holzer, author of the book "The Presidents vs. The Press" and the director of the Roosevelt House Public Policy Institute at Hunter College in New York. "It’s still barbed, there are still tense moments. But that’s OK."

As vice president in 2014, Biden appeared in a comedy video with the star of HBO’s "Veep," Julia Louis-Dreyfus, which drew big laughs at the correspondents’ dinner. The White House director of speech writing, Vinay Reddy, and longtime Biden adviser Mike Donilon worked on Biden’s remarks for this year, the White House said, tapping material from a variety of people both inside and outside government.

Psaki already acknowledged trying to lower expectations, saying the speech was"not funny at all. Just kidding." Presidential attempts at humor can be tricky, though.

At the 2011 dinner, Obama skewered an unamused Trump — in his presence — over Trump’s fictitious claims about the then-president’s birth certificate. Obama concluded by musing about Trump taking his job one day, saying, "He certainly would bring some change to the White House" as banquet hall screens flashed a parody image of 1600 Pennsylvania Avenue’s grand façade fitted with a Trump logo, golden columns, a digital clock and a sign proclaiming "Hotel, Casino, Golf Course, Presidential Suite."

That turned out to be prophetic, since Trump of course succeeded Obama — though the overhauls he eventually brought to the presidency stopped short of affixing his name to the White House.