Authorities are searching Wekiwa Springs after reports of a missing diver.

APOPKA, Fla. - Wekiwa Springs State Park reopened in the early afternoon, Tuesday, after an all-out search for a missing diver.

Divers were in the water, helicopters in the air, and emergency crews swarmed the springs searching for a missing man who witnesses say went diving in the spring.

“I saw this man dive in,” said Halle Cabrera, who watched the man dive, “he dove, came back up for air -- he was under for three minutes. Then he came back up. He was fine, he said something I didn't hear, but then he dove back down and he's been under there for more than an hour and he hasn't come up for air, we haven't seen him pass by, he hasn't left at all. No one saw him leave.”

“Usually free-divers require safety procedures in place, and doing it out here in a spot involving caves and an overhead environment can be very dangerous,” said Brandon Allen, with Orange County Fire Rescue. 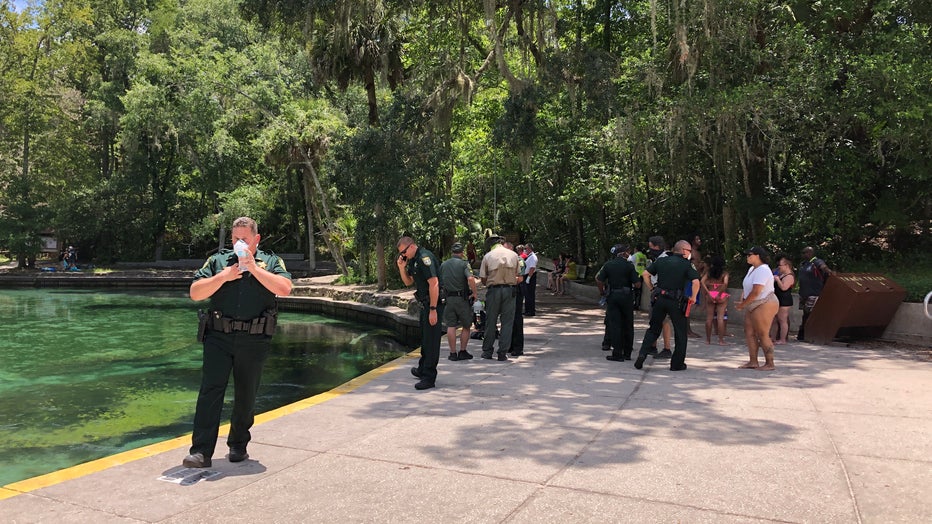 From around 11 a.m. till about 1:30 p.m., divers searched three caves in the area, turning up nothing. Parks officials said spring goes 20-30 feet straight down and gushes 500 gallons of water per second. They reopened the springs to swimmers and sunbathers once the law-enforcement cleared out. Witnesses say they did all they could.

“We went diving to see what was up. I tried to see, but you can't really see because it's pitch black, the cave is pitch black,” Cabrera said, “you can't see anything.”

Fire rescue crews said the man was diving alone and they didn’t have a good description of him. They said it was possible he may have left without anyone noticing.

“Therefore the conclusion is it's possible the individual who was spotted went ahead and cleared that area and left unbeknownst to those individuals concerned for their safety,” said Carrie Proudfit, OCFR Spokeswoman.