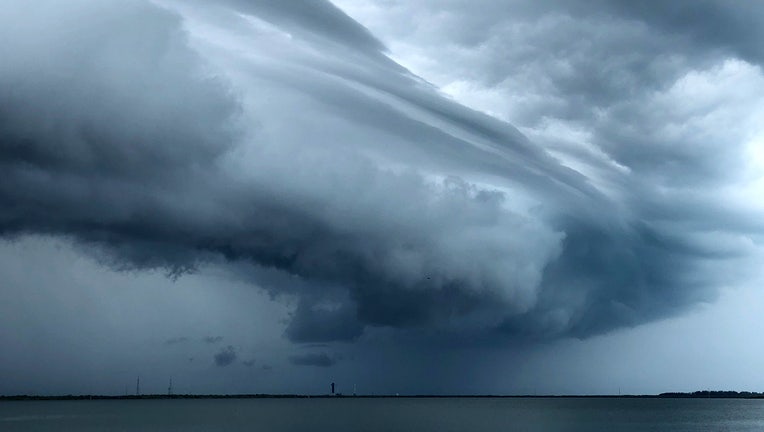 Pad 39A and the Falcon 9 rocket are dwarfed by a storm cloud during Wednesday afternoon's launch attempt.

CAPE CANAVERAL, Fla. - The weather forecast for Saturday’s launch attempt of SpaceX’s Demo-2 mission is not any better than it was yesterday, when pesky storms grounded the flight.

Meteorologists with the Space Force’s 45th Weather Squadron say there is only a 40-percent chance of acceptable weather for the 3:22 p.m. window.

Wednesday, storm after storm rolled through Cape Canaveral, where NASA and SpaceX were trying to launch the first crewed mission since 2011. The weather was looking better as the 4:33 p.m. launch time neared, but it didn’t quite clear enough for a safe liftoff.

That kept the Dragon capsule and its two astronauts on the ground for at least a few more days.

With tropical summertime storms again a daily feature in Florida, it may be no surprise that this weekend’s forecast is for more of the same. Forecasters say a weak east coast sea breeze will allow any afternoon thunderstorms to linger along the coast, bringing a high likelihood of unsuitable weather around Kennedy Space Center.

The forecast for Sunday afternoon's launch attempt is similar.

The mid-afternoon launch window is dictated by the space station’s position in orbit. SpaceX has to launch the Falcon 9 at an exact time in order for the Dragon capsule to be delivered to the proper point in space to rendezvous with the station.