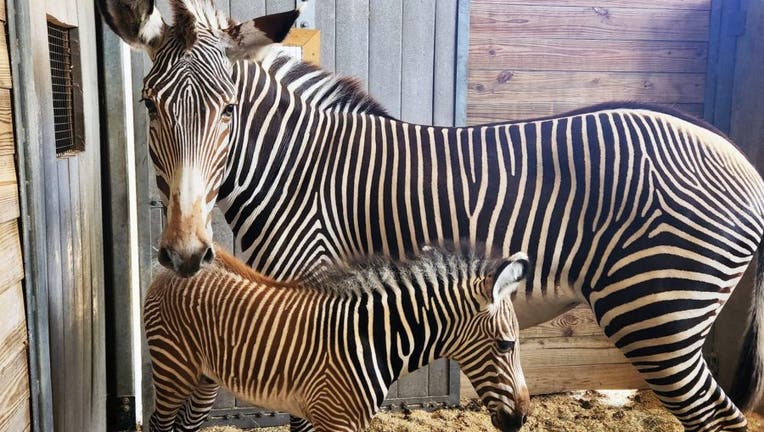 BREVARD COUNTY, Fla. - Ziggy, a baby zebra and one of the newest members of the Brevard County Zoo in Florida took his first steps recently – and even a few gallops – while exploring his habitat.

Video shared by the zoo on its Facebook page showed Ziggy running with mom, Iggy, and her zebra friend, Zonka, speeding past trees, galloping along some giraffes, and a cautious stop when a new animal approached.

"In their natural range, Grévy’s typically separate themselves from their herd after giving birth, and we are mimicking this as closely as possible by allowing mom and baby to have isolated bonding time," the zoo said.  Now, after about a month of bonding, Ziggy and his mom stepped out into the public eye.

Ziggy is the second of two Grévy zebras who were born at the zoo in the last month.

A few months ago, the zoo announced that two of its zebras, Lauren and Iggy, were pregnant.  Lauren gave birth on June 1, marking the first ever zebra birth at the zoo. About a month later, Iggy gave birth to Ziggy on June 30.

Both foals are fathered by Bakari, the zoo's nine-year old male zebra. He was sent to the zoo as part of the Species Survival Plan breeding program in hopes to repopulate the Grévy zebra species. Grévy zebras are classified as endangered species due to loss of habitat, hunting and competition for resources, according to the zoo.