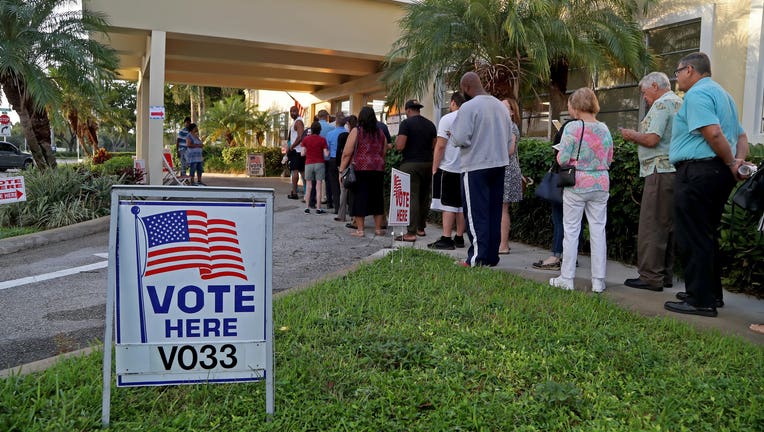 TALLAHASSEE, Fla. - Floridians might approach the highest voter-turnout rate for a general election in at least half a century, as more than 41 percent of eligible voters have already cast ballots in the Nov. 3 election.

With the second week of early voting underway, the state Division of Elections reported Monday morning that 6,018,430 ballots had been cast at early voting sites and by mail. In all, Florida has 14,441,860 voters registered for the election.

The 1992 presidential contest had the highest modern turnout rate at 83 percent.

As of Monday morning, registered Democrats had submitted nearly 1.79 million votes by mail, while 766,794 had used in-person early voting, according to numbers posted online by the Division of Elections. About 1.02 million Republicans had used early voting, while nearly 1.18 million had voted by mail.

People without party affiliation had cast 791,303 mail-in ballots, while 397,648 had gone to early voting sites. The remainder of the votes in the overall total were cast by third-party voters.

The heavy voting has come as polls show Republican President Donald Trump and Democratic presidential candidate Joe Biden in a close race in Florida, one of a handful of critical battleground states across the country.

Trump, who has repeatedly criticized vote-by-mail processes in other states as being open to fraud, cast his ballot Saturday at an early voting site in Palm Beach County, his adopted home.

Both campaigns are trying to rally supporters across the state. Trump and Vice President Mike Pence campaigned in Florida last week, and Biden is slated to appear Thursday in Broward County and Tampa, the Democrat’s campaign announced Monday.

Also, former President Barack Obama is slated to campaign Tuesday for Biden in Orlando, while Trump’s daughter, Ivanka, will campaign in Sarasota and Miami, and Trump’s daughter-in-law, Lara Trump, will be in Cocoa, Panama City and Pensacola.

Trump’s campaign Monday said it had knocked on 3 million doors and made 1 million phone calls to Floridians in the past week.

With all of the attention, election supervisors said they expect potentially 60 percent of the state’s registered voters to have cast ballots before the polls open on Nov. 3.

“Forty percent (as of Monday) doesn’t leave you many at the polling places on Election Day, and we’ve got a week left of early voting still,” Jefferson County Supervisor of Elections Marty Bishop said. “So, I’m expecting probably to be between 50 to 60 percent of the voters will have already participated and voted their ballots by the time Election Day gets here.”

Florida Chamber of Commerce Data Director Alex Coelho said this year’s turnout total might land just below the 1992 record but would still be impressive.

“Something like 80, 81 percent,” Coelho said Thursday during the Florida Chamber Foundation’s Future of Florida Forum. “I think that’s going to be one thing that people wake up (Nov. 4) and are just amazed by, is how many people voted. It’s going to be likely over 11 million of us across the state voting out of 14 million, which is a really, really big number. You look at just four years ago, we had 9 ½ million votes cast. And that was a record.”

Steve Schale, CEO of a Biden super PAC called Unite the Country, said Florida is “headed towards record turnout here, just like we are everywhere in the country.”

Schale pointed to evidence that Democrats have moved from a past emphasis of voting in-person to voting by mail, while Republicans have shifted from mailing in ballots or waiting until Election Day to early voting. But the election also includes many new voters and people who sat out past elections.

“Republicans continue to have a pretty big chunk of voters out there yet to be voting,” Schale said during a video conference call with reporters on Friday. “But on the upside, Democrats continue to turn out more new registrants, which means people that have joined the (voter) roll since 2016, and more expansion voters, people that have been on the rolls for a while but haven’t voted since before 2016.”

“That continues to be an edge that, you know, gives me some comfort about where things are headed,” Schale continued. “Again, there are still a massive number, pretty close to the Democratic lead actually, of Republican advantage among people yet to come.”

The 1992 general election, which came after Operation Desert Storm and was amid a sluggish recovery from the 1990-1991 recession, featured Republican President George H.W. Bush, Democratic challenger Bill Clinton and Texas billionaire H. Ross Perot and his Reform Party.

A year later, Clinton signed the 1993 Motor Voter Act, which offered voter registration to people when they applied for driver’s licenses or public assistance and included provisions that made it tougher to remove people from registration lists.

From 1956 to 1992, with presidential contests averaging 76 percent turnout in Florida, the lowest percentage was 70 percent in 1956, when President Dwight Eisenhower was re-elected.