Birds swarmed over a Texas parking lot on January 8, perching on the cars in a scene worthy of Alfred Hitchcock. (Credit: Kenna Mitchell via Storyful)

It’s as if one of Alfred Hitchcock’s movies came to life.

Video taken on Jan. 8 shows swarms of birds perched on cars and flying around a parking lot in Frisco, Texas.

Kenna Mitchell was outside Stonebriar Mall when she captured the unnerving sight of dozens of birds taking over the parking lot and their incessant squawking.

"We went to Stonebriar Mall just after dusk and the entrance by the Cheesecake Factory was overrun with thousands of birds," Mitchell said. 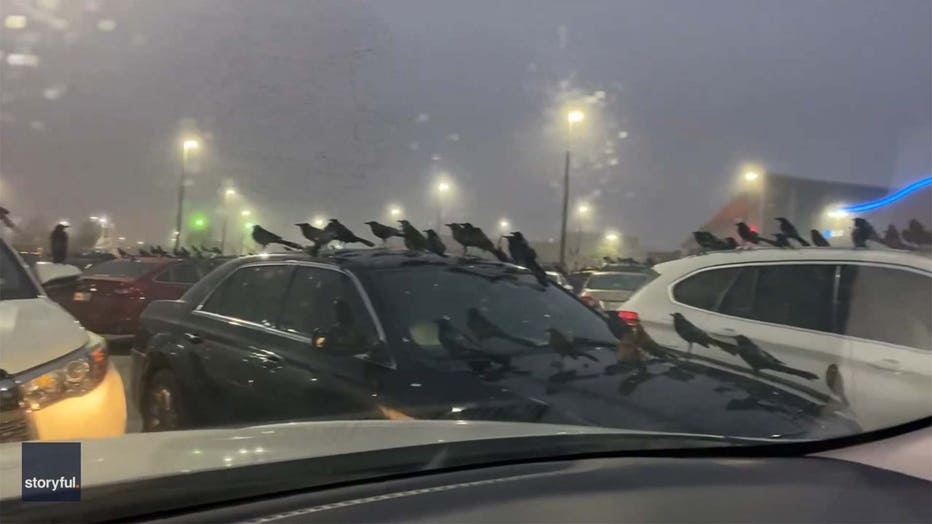 RELATED: Fish rain on Texas town, sparking local officials to speak out: 'This isn't a joke'

"These grackles were perched on cars, in the trees, and swarms were everywhere you looked. Other people in the lot were just amazed at the sheer number of birds," Mitchell continued.

"Very loud and very gross, but still quite a sight to see! Definitely in need of a car wash now!" she added.

The common grackle is often seen in north and east Texas, according to Texas A&M Grilife Research.

"Flocks of these long-legged, social birds strut and hop on suburban lawns, golf courses, fields, and marshes in Texas, the Southwest, and southern Great Plains. In the evening, raucous flocks pack neighborhood trees, filling the sky with their amazing (some might say ear-splitting) voices," according to the All About Birds website.