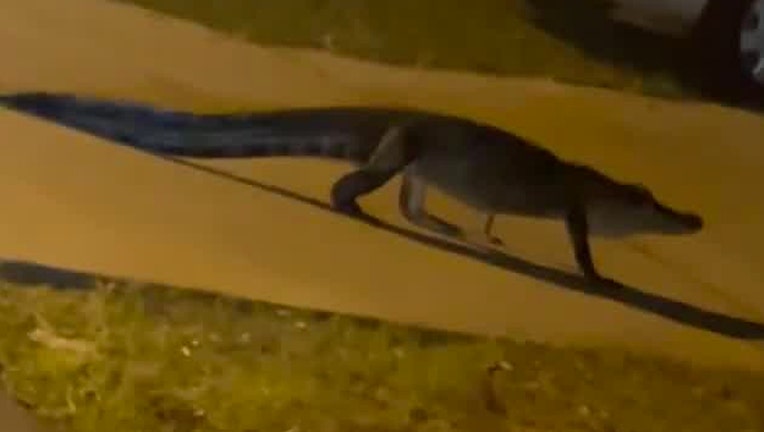 An alligator was spotted strolling through a Florida neighborhood this month, video shows.

The video was taken earlier in April in the Plum Lakes Estates neighborhood of Clermont.

"Last night in my neighborhood! If this ain’t some Florida s*** right here!" Chessy Sanchez, the woman who took the video, wrote on Facebook.

This is just one of several alligator spottings in Florida this month alone.

The Hillsborough County Sheriff’s Office released deputy body camera video this month of a trapper and deputies wrangling a gator that was found underneath a parked car at a Tampa apartment complex.

Local alligator experts are cautioning people not to bother alligators if they see one.

Gator mating season typically begins in May or June, but their courtship starts in mid-April. That means more alligator sightings happen as they search for their mates. By late June or early July, female gators will lay between 32 to 46 eggs. Incubation periods for alligators take about 60 to 65 days, and baby gators will be born in late August or early September, according to the Florida Fish and Wildlife Conservation Commission (FWC).

He said if you ever find an alligator in a similar situation never feed it, touch it or try to scare it. He said the best option is to keep a safe distance and call Florida Fish and Wildlife Commission’s Nuisance Alligator Hotline at 866-FWC-GATOR (866-392-4286). They will send out a contracted licensed trapper to catch the gator.

Fisher also said loud noises probably would not scare the gator and he does not recommend trying to scare it off.

The Hillsborough County Sheriff's Office released body cam video showing the 'arrest' of a curious alligator that was found under a parked car in Tampa.