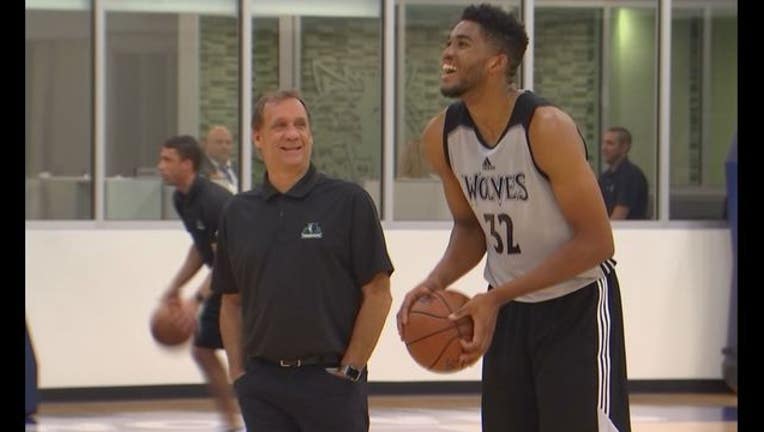 MINNEAPOLIS (KMSP) - An incredible tribute video for Flip Saunders played prior to the Timberwolves' home opener game on Monday at the Target Center. Those including Larry Bird, Adam Silver, Phil Jackson, Chauncey Billups and Mark Madsen all expressed what the late head Timberwolves coach meant to them.

Remembering Flip Saunders, friends and colleagues from around the NBA: (Watch here)

“No one was more passionate about the game of basketball than Flip Saunders.” -Adam Silver, NBA Commissioner

“I’d like to have a list of gymnasiums in Minnesota in which Flip Saunders ever stepped in -- I mean, he was everywhere.” -Charley Walters, journalist

“Flip was an icon, and a staple in that community and as a basketball mind.” -Kenny Smith, former NBA player and TV analyst

“Flip Saunders was one of the most creative and innovative coaches in the time I’ve been in the league.” -Jeff Van Gundy, former NBA coach and TV analyst

“If you weren’t prepared to play his teams, he was going to make you look like a fool." -Pat Riley, former NBA coach

“I liked his coaching aspect because he did things that were unique and what he tried to do with the game was special.” -Phil Jackson, former NBA coach

“There was never anybody left out with Flip. You know from player 1 to 15, he was always picking everybody up.” -Kevin Love

"There’s not a lot of coaches that us players play for that you continue on and have a life-long relationship/friendship with." -Chauncey Billups, former NBA player

"He was always smiling. That to me was one of the most unique things." -Kevin Harlan, announcer

"He was fun to be around. Just an incredibly nice person." -Steve Kerr, Golden State Warriors coach

"Flip was what I call a lifer, he loved the game, he respected the game like nobody’s business. He was all in. He obviously was someone that we all respected." -Gregg Popovich, San Antonio Spurs coach

"Everybody who came in contact with Flip as a person, not just as a coach, is blessed to have done so.” -Larry Bird, former NBA star

"Flip is one of the greatest human beings I’ve ever met in my life." -Mark Madsen

"He’s a great person, a great friend. And a great role model from the start." -John Wall

"Flip would talk to you and genuinely care about what you were saying. Because nobody can talk as much as Flip Saunders, and I mean nobody." -Chad Hartman, journalist

"He was old school as far as relationships go and always put his arm around you, always had a cool conversation with him, I’d always be able to call him anytime you needed” David Joerger, Memphis Grizzlies coach

"He’d answer any time of day. You could call at 3 a.m. and Flip would answer the phone." -Fred Hoiberg, Chicago Bulls coach

"Flip we all loved you, we’re all better for having known you and we’ll miss you brother." -PJ Carlesimo, NBA coach

"Flip was a great guy, passion for this game he loved basketball and he loved everybody, he made everybody feel special. I mean, he was Flip." -Ricky Rubio

"When you play here you’re not just a part of the team, you’re a part of the family. So this is a really big loss for us." -Nikola Peković

"It’s always been just a two-way street where he’s always been giving me advice and looking out for me and I always knew it was coming from the heart" -- "I’m going to keep your vision alive. I’m going to keep working hard to make this organization the vision that you always had us being, which is a championship team." -Karl-Anthony Towns

"Flip did so much for me and my career and it’s just a blessing to be able to teach some of these things that he taught me to these young players here in Minnesota." -Tayshaun Prince

"He had a vision. You know, were trying to make that vision live on forever. You know every day, every practice, every game we play for Flip.” -Andrew Wiggins

"I pride myself in being his draft pick. He fought for me and you know I’m gonna miss him, I love him. It’s a tragedy but we’re going to do everything for him." -Zach LaVine