(Warning: Video may be distressing to some viewers) Security footage captured the moment a flock of yellow-headed blackbirds crashes into the ground on a street in Mexico’s Chihuahua state early on Feb. 7, 2022. Credit: Alejandra Herlinda Iglesias Gonzalez via Storyful

Security footage captured the moment a flock of yellow-headed blackbirds suddenly dropped from the sky on a street in the northern Mexican state of Chihuahua — but the reason behind the mysterious fall remains unclear.

Several dead birds were discovered early on Feb. 7 by residents in the city of Cuauhtémoc, the Spanish-language El Heraldo de Chihuahua reported. Local police were called to the area, who observed dozens of dead birds on the sidewalks and streets, according to the newspaper.

Alejandra Herlinda Iglesias Gonzalez told Storyful that two of her relatives were among those who witnessed the birds on the street. Police spoke to the family and discovered the moment the birds crashed from the sky using Gonzalez’s security camera footage.

The video, which has since been shared widely on social media, shows the cloud of blackbirds suddenly crashing to the ground. Some appear to have survived the fall and are seen flying away, but many others were left lying dead on the city streets. 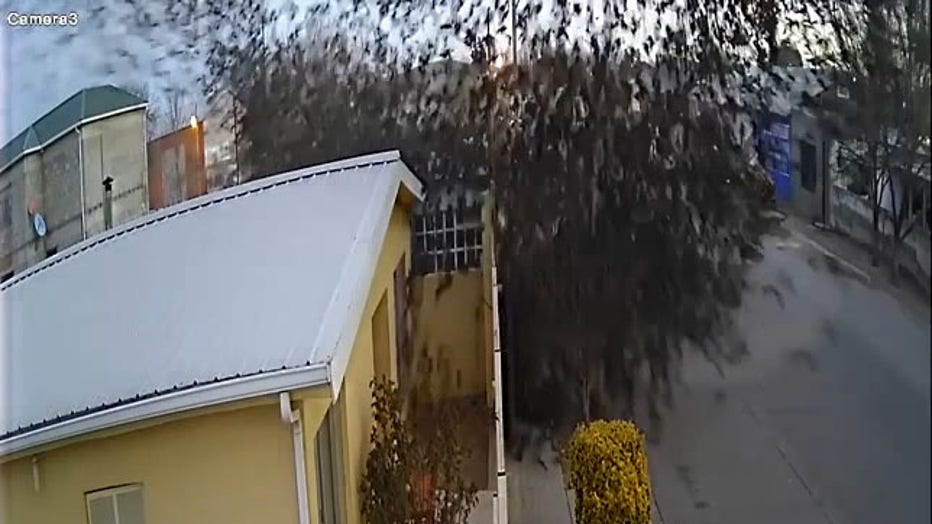 A screengrab from the security footage shows the giant flock dropping from the sky on Feb. 7, 2022, in the city of Cuauhtémoc, Chihuahua, Mexico. Credit: Alejandra Herlinda Iglesias Gonzalez via Storyful

A veterinarian who responded to the scene at the request of authorities indicated that the birds may have died as a result of inhaling toxic fumes from a nearby heater or an overload from power lines, El Heraldo de Chihuahua reported. But a specific cause was not immediately determined.

Yellow-headed blackbirds generally spend the summer in the west-central U.S. and Canada, and in the winter migrate to the western U.S. from California to Texas and south to Mexico and Central America, according to the National Wildlife Federation.

There was a similarly shocking occurrence in Pennsylvania in early 2020. Birds suddenly fell from the sky in Bucks County, which one witness described as "something straight out of a movie."