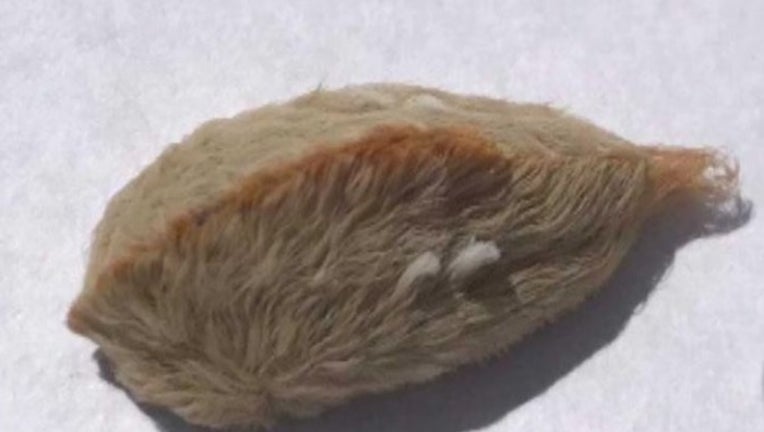 ORLANDO, Fla. - Don't be fooled by their fuzzy wuzzy appearance: those seemingly harmless caterpillars could poison you!

The venomous puss caterpillars have made their seasonal return to several states, including Florida.

Known as one of the most venomous caterpillars in the U.S., a 2014 report by National Geographic stated that this caterpillar’s fluffy-looking “hair” actually hides small, sharp spines that “stick in your skin."

Experts say the sting of a puss caterpillar feels like a bee sting -- only worse.

Bri Oteri of Dade City, Florida recently posted on Facebook about being hospitalized after being stung by a puss caterpillar.

"I was leaning on this wooden fence and immediately felt my wrist burning," she wrote in a post that has been shared more than 39,000 times. "I started screaming for my brother to get it off me. He had no clue what was. It felt like fire ants in that moment. I looked down and saw this fuzzy thing moving across the wood."

She said after an EMT cleaned her up, she went about her morning. Later on, the pain struck again through her chest and all the way up her arm. Oteri immediately went to the emergency room.

"Morphine didn’t even touch the pain. I cried and pleaded with God for hours to make it stop. I’ve had 2 C-sections, other surgeries, and nothing came close to the pain. It felt like someone was drilling into my bones."

"It's not an instantaneous shock of a hornet or wasp, but it builds for a long time in a frightening way," David Wagner, an entomologist at the University of Connecticut, tells USA TODAY. "No one expects stings to gain in impact or discomfort, and these will, even up to an hour later. It packs quite a wallop."

The sting from a puss caterpillar can cause severe pain and could even leave behind a hematoma, said Wagner.

One way to decrease pain is by removing the caterpillar’s venom-filled spines, which those stung can do by covering the affected area with tape and then peeling it off. Wagner also says you should immediately take a shower to wash away the hairs. This may help the allergenic reaction.

The Florida Poison Information Center also advises to “apply ice packs to reduce the stinging sensation, and follow with a paste of baking soda and water."