The announcement was not a surprise: Demings last month said to "stay tuned" amid reports that she would run for Senate.

She made the announcement in a YouTube video on Wednesday morning.

Nevertheless, her entrance ratchets up the profile of the race, as Demings drew national attention last year when President Joe Biden considered her as a potential running mate and as she served as one of the House impeachment managers in former President Donald Trump’s first impeachment trial.

In a YouTube video announcing her candidacy, Demings traced her background from growing up as a Black child in Jacksonville to becoming Orlando police chief to getting elected to Congress.

"When you grow up in the South, poor, black and female, you have to have faith in progress and opportunity," Demings said in the video, "My father was a janitor, and my mother was a maid. She said, ‘Val, never grow tired of doing good. Never tire. Work hard, not just for yourself but for others."

In the video, Demings also cited her role in impeaching Trump, saying "we brought law and order to a lawless president,"  and tried to portray Rubio as a go-along Washington insider.

"Unlike some in Washington, I never tire in standing up for what I believe is right because no one is above the law, But it turns out, there are some in Washington who prefer the same old tired ways of doing business," she said as the video flashed pictures of Rubio with Trump and U.S. Sen. Ted Cruz, R-Texas.

"This is not the kind of leader Floridians want or need," Scott said in the statement. "Congresswoman Val Demings is a Pelosi puppet just looking for a promotion. She’s supported the most radical, socialist policies of The Squad that would devastate Florida families. Senator Rubio has led the way in the Senate to fight for priorities every Florida family wants: more jobs, safe communities, a great education for their children and making sure freedom and democracy are preserved at home and across the globe." 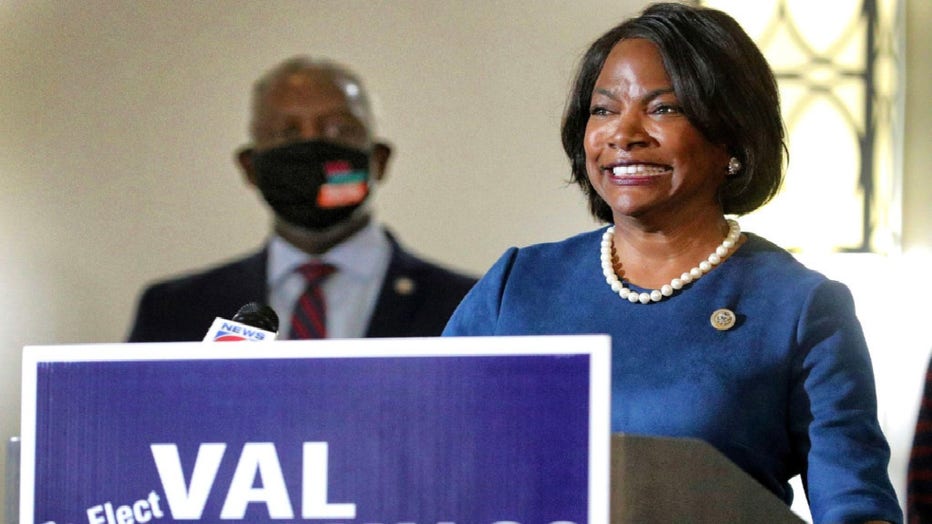 Demings, 64, served as an Orlando police officer for 27 years, rising to chief, and was first elected to Congress in 2016. She is part of a power couple in Central Florida, as her husband, Jerry Demings, is Orange County mayor.

Demings could face a primary campaign next year against former U.S. Rep. Alan Grayson, also from the Orlando area. But another potential candidate,  U.S. Rep. Stephanie Murphy, announced last month that she would not run after it became apparent that Demings would seek the seat.

"The reality is Marco Rubio will not be an easy opponent, especially if it’s on the heels of a bruising primary where Democrats spend millions attacking each other instead of using those millions to build the infrastructure we so desperately need to win here," Murphy said in a video. "So I’ve decided, instead of running for the U.S. Senate, I will devote my energy to helping make our party stronger."

Rubio, a former state House speaker, was first elected to the Senate in 2010.

After an unsuccessful bid for president in 2016, he was re-elected to a second term in the Senate. He received 52 percent of the vote in the 2016 race, easily defeating former Democratic Congressman Patrick Murphy.

"Marco has consistently delivered for Florida families. He created the small business rescue plan that saved millions of Florida Jobs, took on his own party to double the Child Tax Credit, and fought to ensure Florida veterans receive the care they earned.

"Marco’s contrast with Val Demings could not be greater because she has no record of results for Florida. Since coming to Washington, she has voted with Nancy Pelosi nearly 100% of the time. She supported efforts to defund the police, opposed tax relief for working families, and led the effort to put Washington in charge of Florida’s elections. Florida deserves a Senator with a proven track record of fighting, and winning, for Florida families."

Politico had previously reported that Demings was considering running against Governor Ron DeSantis or for Rubio’s seat.

"Either of these positions she would be able to fill quite well," said University of Central Florida political science associate professor Aubrey Jewett.