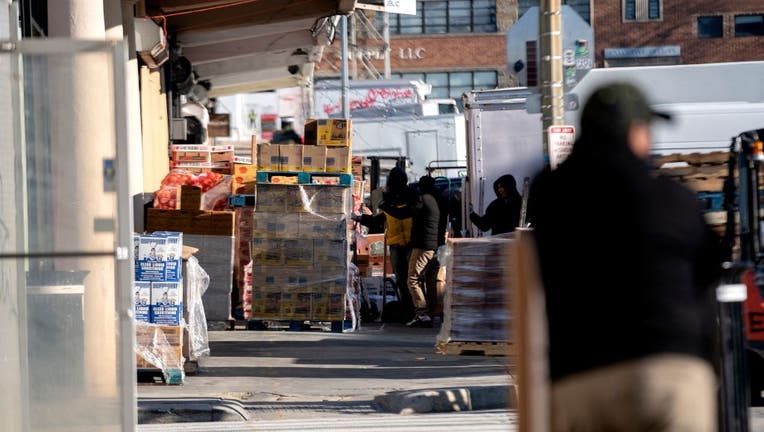 WASHINGTON - Inflation soared over the past year at its highest rate in four decades, hammering America’s consumers, wiping out pay raises and reinforcing the Federal Reserve’s decision to begin raising borrowing rates across the economy.

When measured from December to January, inflation was 0.6%, the same as the previous month and more than economists had expected. Prices rose 0.7% from October to November and 0.9% from September to October.

Shortages of supplies and workers, heavy doses of federal aid, ultra-low interest rates and robust consumer spending combined to send inflation leaping in the past year. And there are few signs that it will slow significantly anytime soon.

Wages are rising at the fastest pace in at least 20 years, which can pressure companies to raise prices to cover higher labor costs. Ports and warehouses are overwhelmed, with hundreds of workers at the ports of Los Angeles and Long Beach, the nation’s busiest, out sick last month. Many products and parts remain in short supply as a result.

Prices for a broad range of goods and services accelerated from December to January — and not just for items directly affected by the pandemic. Apartment rental costs rose 0.5% in January, the fastest pace in 20 years. Electricity prices surged 4.2% in January alone, the sharpest rise in 15 years, and are up 10.7% from a year earlier. Last month, household furniture and supplies rose 1.6%, the largest one-month increase on records dating to 1967.

Food costs, driven by pricier eggs, cereal and dairy products, increased 0.9% in January. Air fares rose 2.3%. New car prices, which have jumped during the pandemic because of a shortage of computer chips, were unchanged last month but are up 12.2% from a year ago. The surge in new-car prices has, in turn, accelerated used-car prices; they rose 1.5% in January and are up a dizzying 41% from a year ago.

"Just as price pressures in some areas ease, inflation in other parts of the economy" is picking up, said Sarah House, an economist at Wells Fargo. "The upshot is that inflation is likely to remain uncomfortably high."

The Federal Reserve signaled Wednesday that it plans to begin raising its benchmark interest rate as soon as March, a key step in reversing its pandemic-era low-rate policies that have fueled hiring and growth but also escalated inflation.

The steady rise in prices has left many Americans less able to afford food, gas, rent, child care and other necessities. More broadly, inflation has emerged as the biggest risk factor for the economy and as a serious threat to President Joe Biden and congressional Democrats as midterm elections loom later this year.

Among the Americans who are struggling with pricier food and gas is Courtney Luckey, who has changed her shopping habits and taken on additional work shifts at a grocery store in Charlotte, North Carolina, where she lives.

Luckey, 33, used to be able to fill up a grocery cart for $100. Now, she said, $100 barely fills half the cart. Tomatoes have reached nearly $5 a pound, "which I think is ridiculous." Luckey has switched to canned tomatoes and has begun using coupons for Family Dollar and Food Lion.

To help pay bills, she’s also picked up more hours at a Harris Teeter grocery store. But the store is 30 minutes from her house, so she's had to spend more on gas.

All her forced additional spending has caused Luckey to pull back on the family activities, such as bowling, with her daughter, her brother and his two sons. Those outings now typically happen once a month, rather than every week or two.

Even excluding volatile food and energy prices, so-called core inflation jumped 0.6% from December to January and 6% from a year ago.

Stocks fell in morning trading after the release of the report, with the broad S&P 500 index down 0.6%. The yield on the 10-year bond jumped to nearly 2%, a sign that investors see more Fed rate hikes ahead.

In the past year, sharp increases in the costs of gas, food, autos and furniture have upended many other Americans’ budgets, too. In December, economists at the University of Pennsylvania’s Wharton School estimated that the average household had to spend $3,500 more than in 2020 to buy an identical basket of goods and services.

President Joe Biden appeared in Virginia on Feb. 10, 2022, to speak about how his "Build Back Better" legislation would limit the cost of prescription drugs in the fight against inflation.

Thursday's report will intensify pressure on the Fed and its chair, Jerome Powell, to tighten credit to try to slow the economy enough to cool inflation. Powell signaled two weeks ago that the central bank would likely raise its benchmark short-term rate multiple times this year, with the first hike almost surely coming at its next meeting in March.

With the latest inflation data, some economists expect the Fed may decide to raise its key rate in March by one-half a percentage point, rather than its typical quarter-point hike.

Over time, those higher rates will raise the costs for a wide range of borrowing, from mortgages and credit cards to auto and business loans. That could cool spending and inflation, but for the Fed, the risk is that in steadily tightening credit, it could trigger another recession.

Last week, the average rate on a 30-year fixed mortgage jumped to 3.69%, the highest level in more than two years, according to mortgage buyer Freddie Mac. Higher loan rates will elbow some would-be home buyers out of the market.

Many large corporations, in conference calls with investors, have said they expect supply shortages to persist until at least the second half of this year. Companies from Chipotle to Levi’s have also warned that they will likely raise prices again this year, after having done so in 2021.

Chipotle said it’s increased menu prices 10% to offset the rising costs of beef and transportation as well as higher employee wages. And the restaurant chain said it will consider further price increases if inflation keeps rising.

"We keep thinking that beef is going to level up and then go down, and it just hasn’t happened yet," said John Hartung, the company’s chief financial officer.

Executives at Chipotle, as well as at Starbucks and some other consumer-facing companies, have said their customers so far don’t seem fazed by the higher prices.

Levi Strauss & Co. raised prices last year by roughly 7% above 2019 levels because of rising costs, including labor, and plans to do so again this year. Even so, the San Francisco-based company has upgraded its sales forecasts for 2022.