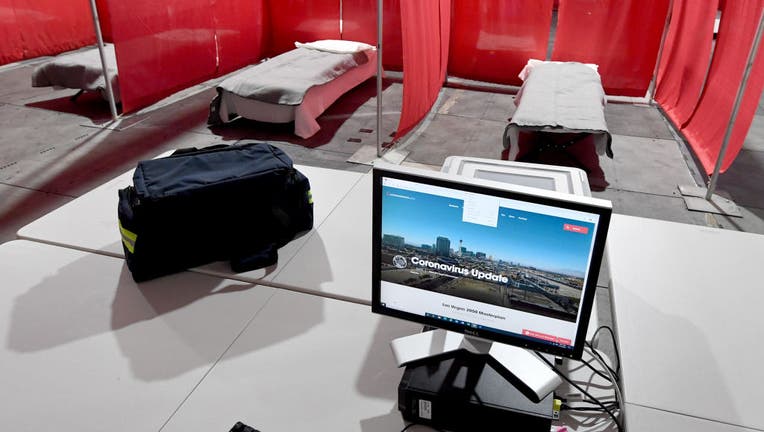 LAS VEGAS, NEVADA - APRIL 13: Cots are set up in a quarantine tent at the joint Clark County-City of Las Vegas ISO-Q (Isolation and Quarantine) Complex for the homeless that was constructed in the parking lot at Cashman Center in response to the coro

The number of people who have died in the United States after contracting the novel coronavirus has surpassed 25,000, according to the latest data from Johns Hopkins.

As of April 14, there were more than 598,000 confirmed cases and 44,000 recoveries in the United States alone. More than 2.9 million people have been tested for the virus and 95,000 have been hospitalized in the U.S., based on Johns Hopkins data.

Across the world, there were more than 1.9 million confirmed cases and over 125,000 deaths.

New York remains the epicenter of the U.S. outbreak, with more than 7,900 deaths attributed to COVID-19 in the city alone.

The death count rises amid reports of turmoil between President Donald Trump and Dr. Anthony Fauci, director of the National Institute of Allergy and Infectious Diseases and a leading voice in the U.S. coronavirus response.

Trump has received frequent criticism over his administration’s preparation for and handling of the pandemic, such as a shortage of necessary medical supplies and early dismissals of the pandemic’s projected severity.

As New York struggles to grapple with its loose reigns on an increasingly destructive pandemic, new COVID-19 hotspots continue to emerge across the United States.

Officials around the world worried that halting quarantine and social distancing measures could easily undo the hard-earned progress. Still, there were signs that countries were looking in that direction. Spain permitted some workers to return to their jobs, a hard-hit region of Italy loosened its lockdown restrictions and grim predictions of a virus that would move with equal ferocity from New York to other parts of America had not yet materialized.