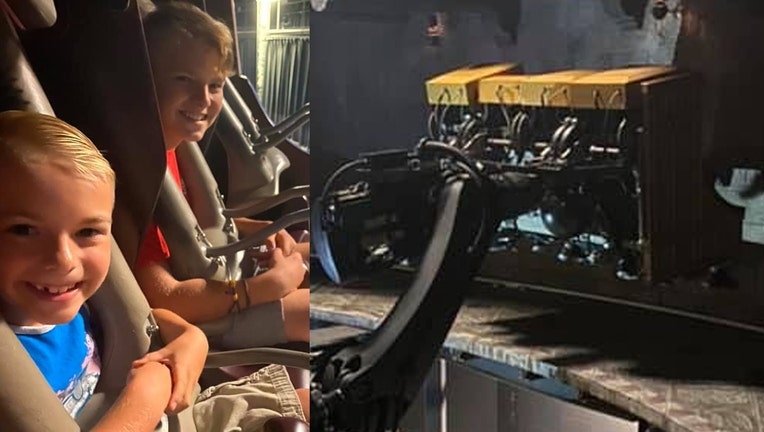 ORLANDO, Fla. - A Florida family was in for a shock after they say they got stuck on one of the Harry Potter rides at Universal Orlando Resort on Saturday.

She said that they went on ‘Harry Potter and the Forbidden Journey,’ a motion-based dark ride in the Hogwarts area of the ‘Wizarding World of Harry Potter.’ However, they were in for a surprise as they got stuck for 45 minutes.

"Anyone else stuck on Forbidden Journey for 45 minutes today?" Angela said. "We were practically upside down for a little over 20 minutes with a dementor in our face before they started manually moving each car back into place."

Angela and her sons spent about 20 minutes stuck upside down. She said that Universal Orlando employees had to manually move each car back into place. It was about 45 minutes until crews safely unlocked them and got the ride vehicles back on the ground so they could exit the attraction.

"When the ride first stopped, my oldest one said he was scared. There was a dementor right in our faces and we were at a very uncomfortable position," she said. Thankfully, though Angela was able to lift the spirits of her son and get them laughing. "We were in the dark for about 5 minutes and then the light came on. With the lights on, we laughed harder because the dementor was just silly looking."

She added, "I tried to stay silly and positive. My boys started playing Marco Polo with other people. There was a group we heard that was clearly upset and using some profanity. I just told my boys that some people handle stress differently than others and it was our job to stay calm under stress. I was really proud of them."

Angela also gave kudos to the Universal Orlando employees who helped them, saying "I was impressed with the professionalism of the employees who asked everyone if they needed a medic as they got off and offered express passes to everyone. It was definitely an experience and I’m very glad we were all safe."

She told FOX 35 that they used their Express passes to ride ‘Harry Potter and the Escape from Gringotts,’ the other Harry Potter attraction at Universal Studios Florida, which she said "neither of my boys have been on because the line is always so long."