UCF student says he was spit on, pepper-sprayed, punched after confronting Neo-Nazi group

A University of Central Florida student who said he confronted a Neo-Nazi group and was spit on and punched is speaking exclusively with FOX 35.

ORLANDO, Fla. - A University of Central Florida student who said he confronted a Neo-Nazi group and was spit on and punched is speaking exclusively with FOX 35.

David Newstat explained he was driving past a group of people wearing swastikas and yelling anti-Semitic slurs at passing cars on the corner of Alafaya Trail and Waterford Lakes Parkway on Saturday.

Newstat said he opened his window and told the group their hatred and negativity were not welcome there.  Following that, he said someone in the group began to spit on him and others surrounded his car.

He said they noticed an Israeli flag on his license plate and started shouting anti-Semitic slurs at him.

"I'm trying to go to the store, to Target, and I'm coming back home, and I'm being berated by Nazis," Newstat said. "My grandfather was a survivor. Other members of my family were survivors of the Holocaust and migrated to the U.S. after. It’s very sad to see people like this can be so ignorant and can have so much hatred built up in their hearts." 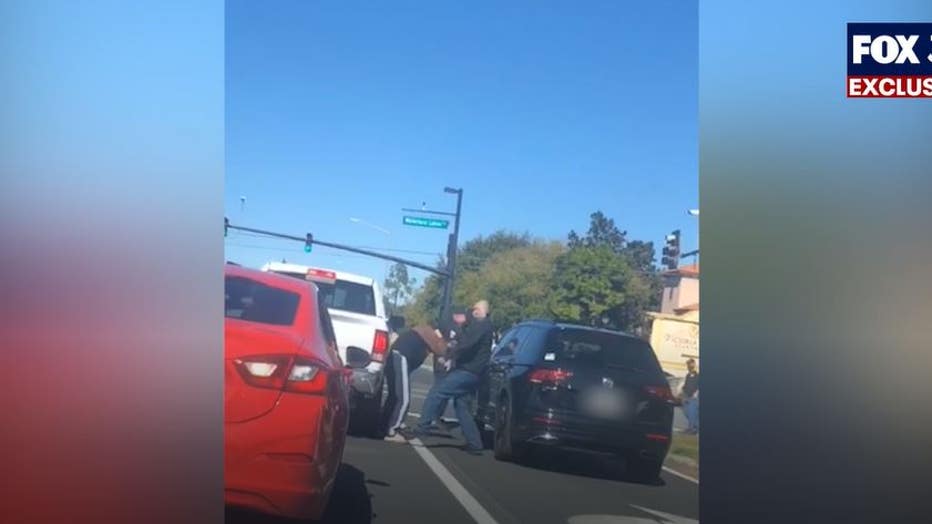 Newstat said he got out of his car and started recording them.

When he was walking back to his car, he said someone spit on him again, so he pushed the person.

In response to this, a cellphone video shows he was punched, kicked and pepper-sprayed.

"I’m literally Jewish and I got attacked, assaulted, pepper-sprayed, spit on, you name it," Newstat said, "called disgusting slurs just because of my religion."

A recent study from the American Jewish Committee found in the last year, one in four American Jews say they have been targets of anti-Semitism.

Rabbi Chaim Lipskier, a faith leader in the UCF community, says the best way for the Orlando community to respond is to keep their faith strong.

"Instead of getting sidetracked by a few ignorant, hostile people, we’ll continue with our vision: being a light to the world, bringing a message of hope and peace, and being louder and prouder of who we are," said Rabbi Chaim Lipskier, of the Chabad Jewish Student Center.

Rabbi Lipskie says the best thing for someone to do is not give hateful groups like those any attention.

"If you want to retaliate, if you want to say something, don’t say it to them, say it to others, live by example," he said. "Be nicer to a Jewish person, let Jewish people around you know that you don’t believe in these things, and it disgusts you."

The Orange County Sheriff's Office said no arrests were made on Saturday, and deputies are investigating any criminal activity reported to have happened.