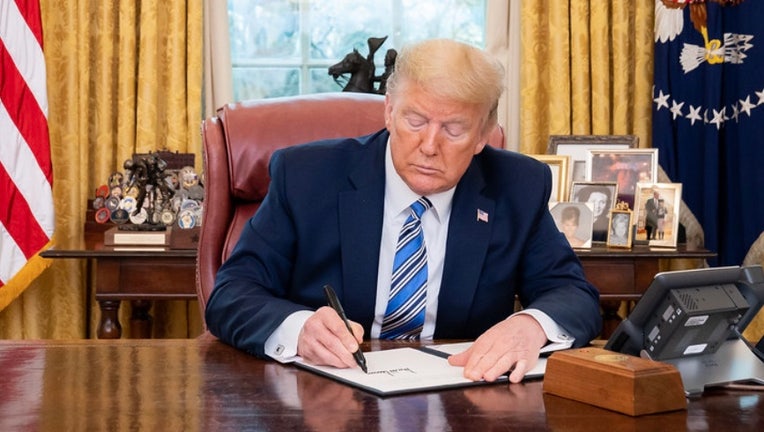 President Trump's name will appear on millions of economic stimulus checks sent to Americans as part of the $2.2 trillion stimulus package passed by Congress and signed by the president last month in an effort to stem the economic effects of the coronavirus.

Sources confirmed to Fox News that Trump's name will appear on paper checks -- in the memo section -- though his signature is not expected to be included.

The Washington Post first reported the change Tuesday night. Citing unnamed senior IRS officials, the Post reported that the Treasury Department is ordering the president's name be printed on the checks in a decision that was made Monday. The Post's sources indicated that the change on the $1,200 checks could delay the time it takes for the checks to reach Americans, but other Treasury Department officials disputed that was the case.

Americans whose banking information the IRS has will not get the Trump-signed checks, and instead will receive a direct deposit that does not include Trump's name.

Asked about how many hard checks -- featuring Trump's name -- would be going out, a Treasury official told Fox News: “The total number of paper checks is subject to a number of variables, including how much info the IRS obtains through the Non-Filers Enter Payment Info web portal and the Get My Payment portal launching today at IRS.gov."

The Post reports the hard checks will have "President Donald J. Trump" written on the left side of the checks.

It is not standard practice for the name of the president to appear on government checks, and the stimulus checks with Trump's name on them will still be signed by an official with the Bureau of Fiscal Service, according to the Post.

RELATED: Reopening the economy: When will it happen?

The decision to have Trump's name on the checks comes as the government's response to the coronavirus pandemic has become highly politicized, with Democrats panning Trump's often long-winded daily coronavirus briefings and Trump returning fire by criticizing Democratic governors and members of Congress for their responses to the crisis.

Trump has also blamed the World Health Organization for contributing to the seriousness of the pandemic by putting "political correctness over lifesaving measures" as it has often repeated China's claims on the communist nation's handling of the virus.

Many on the left have criticized Trump for the decision to print his name on the stimulus checks.

"If the check you’re waiting for is delayed, you can thank this man," Harvard law professor Lawrence Tribe said in a tweet Wednesday morning. "He cared more about getting his name on the check than about your need for it. He’s worse than contemptible."

The $2.2 trillion CARES Act, the name of the package that provides for the stimulus checks, is unlikely to be the last piece of legislation passed to combat the coronavirus, as Trump and members of Congress on both sides of the aisle have indicated that they hope to pass potentially two more laws with total expenditures between them of possibly more than $2 trillion. It's unclear whether those further measures would include more checks for Americans, or even when they might be passed.