President Donald Trump is slated to make a stop in Ocala for a rally on Friday. The decision to go to Marion County is methodical. While the county has been a Republican stronghold, there are nearly 60,000 registered voters who do not identify with a political party.

TALLAHASSEE, Fla. - As he barnstorms Florida this week, President Donald Trump on Wednesday delivered a tamped-down stump speech to economic clubs in Florida and five other states to boast about his administration’s record on jobs, growth and lower taxes and to warn that an election victory by his Democratic opponent would mean economic doom for the nation.

Trump appeared at a rally Monday in Sanford, will participate in a televised “town hall” event Thursday night in Miami and will host a rally Friday in Ocala.

The president’s focus on Florida, where more than 1.9 million voters have already cast ballots by mail and where early-voting sites open Monday, highlights the significance of the Sunshine State in the Nov. 3 election. With 29 electoral votes and Republican and Democratic registered voters almost evenly split, Florida is considered a critical element of a White House path to victory by both Trump and Democratic nominee Joe Biden. Biden made appearances in South Florida on Tuesday.

Trump’s wide-ranging remarks Wednesday to the Economic Club of Florida and the other clubs, delivered from the Rose Garden outside the White House, touched on his efforts to cut taxes, promote U.S. businesses and crack down on illegal immigration.

The president, who was sidelined from the campaign trail last week after being diagnosed with COVID-19, also said the nation’s economy was booming until the coronavirus pandemic prompted widespread shutdowns that cratered the finances of businesses and individuals.

The Trump administration is “on track to deliver at least 100 million doses of vaccine before the end of the year,” he asserted. 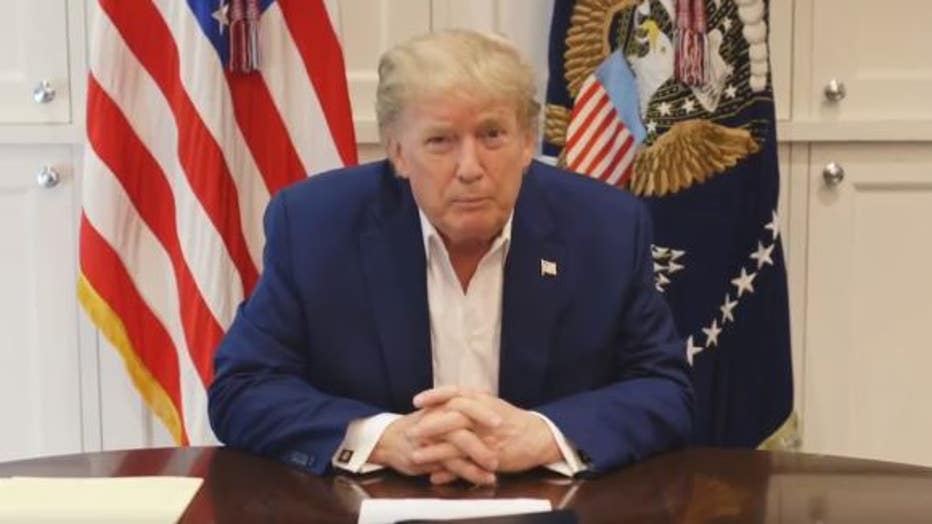 Trump also courted older voters, who are more vulnerable to serious illness and death from the coronavirus and who heavily supported him in Florida four years ago, saying, “I will not rest and I will not relent until all American seniors are safe.”

In characteristic fashion, the Republican president targeted Democrats for “needlessly destroying millions of lives” with “unscientific lockdowns” as COVID-19 spread throughout the country this spring.

“The cure cannot be worse than the problem itself. And that’s what a lot of states run by Democrats have done to their people, and it’s turning out very, very bad for them,” he said.

While the nation is grappling with a reckoning about centuries-long racial inequities in criminal justice and other areas of society, Trump on Wednesday maintained that Black and minority Americans have flourished during his tenure.

“We’re lifting up citizens of every race, color, religion and creed. We’re delivering a future of fairness, justice and dignity for every community in our land. And we’re defending our values, our principles and our cherished way of life,” he said.

Trump fielded questions from the leaders of economic clubs in Florida and in Washington, D.C.

Economic Club of Florida Chairwoman Cindy O’Connell asked the president to explain how people in Florida and elsewhere would benefit from a second Trump term.

“The big thing is taxes are lower,” he said, adding he intends to seek additional tax cuts for individuals and businesses.

But during a campaign stop Tuesday in Miramar, Biden accused Trump of “overwhelming lying, misleading, and irresponsible action” in his handling of the coronavirus pandemic, which has caused the deaths of more 15,500 Floridians. He also offered a different take on economic issues.

“Folks, we are better than this. Despite the crises we face, we have an enormous opportunity to build back better, to get everyone a fair return on their work, and an equal chance to get ahead,” the former vice president said. “For example, for communities of color in South Florida and across the country, the question is, how do we break the cycle where in good times they lag, in bad times they get hit first and hardest, and in recovery, it’s toughest to bounce back?”

Trump on Wednesday painted a gloomy picture if Biden were to become president.

“Your suburb would be gone. The American dream will be gone,” he warned, noting that some members of the clubs are Democrats.

“And some of you are friends of mine. You will see things happen that will not make you happy. I don’t understand your thinking,” Trump said. “I can only assume it’s habit.”

Biden, meanwhile, said Tuesday it is time for change after nearly four years of Trump in the White House.

“It’s time to restore America’s soul. It’s time to rebuild the backbone of America, the middle class. And this time, bring everybody along, no matter your race, age, gender, religion, ethnicity, sexual orientation or disability,” he said