Wreaths Across America will take place

President Donald Trump on Tuesday said the annual Wreaths Across America at Arlington National Cemetery will 'now go on' after he reversed the 'ridiculous' decision to cancel the program, following protests from lawmakers and U.S. military veterans.

ARLINGTON, Va. (FOX News) - President Donald Trump on Tuesday said the annual Wreaths Across America at Arlington National Cemetery will "now go on" after he reversed the "ridiculous" decision to cancel the program, following protests from lawmakers and U.S. military veterans.

The president's tweet followed an announcement from Secretary of the Army Ryan McCarthy that Arlington National Cemetery will host the program after all. The program honors fallen soldiers with wreaths all over the country and abroad, but was canceled at Arlington due to the coronavirus crisis.

“I have directed Arlington National Cemetery to safely host Wreaths Across America,” McCarthy tweeted. “We appreciate the families and visitors who take time to honor and remember those who are laid to rest at our nation’s most hallowed ground.”

The cemetery announced Monday that they were canceling the event that had been scheduled for Dec. 19 at Arlington National Cemetery and the Soldiers' and Airmen's Home Cemetery due to coronavirus concerns.

"I encourage Army leaders to reconsider this decision," Sen. Tom Cotton, R-Ark., tweeted in response to the news. "Thousands of people have marched in DC streets the past couple weekends for Joe Biden and Donald Trump. Surely volunteers can responsibly place wreaths on the graves of our fallen heroes at Arlington."

Rep. Dan Crenshaw, R-Texas, himself a veteran, also urged the cemetery to reconsider, citing measures that could be taken to protect attendees.

"This decision to cancel #wreathsacrossamerica must be reversed immediately. Critical thinking must win out over emotion," Crenshaw said in a tweet. "Large areas, outside and well spaced, with masks on, is perfectly safe. Our fallen deserve to be remembered."

In a press release, Arlington National Cemetery said that it had conducted a "thorough analysis" of how to safely conduct the event before ultimately deciding to cancel. 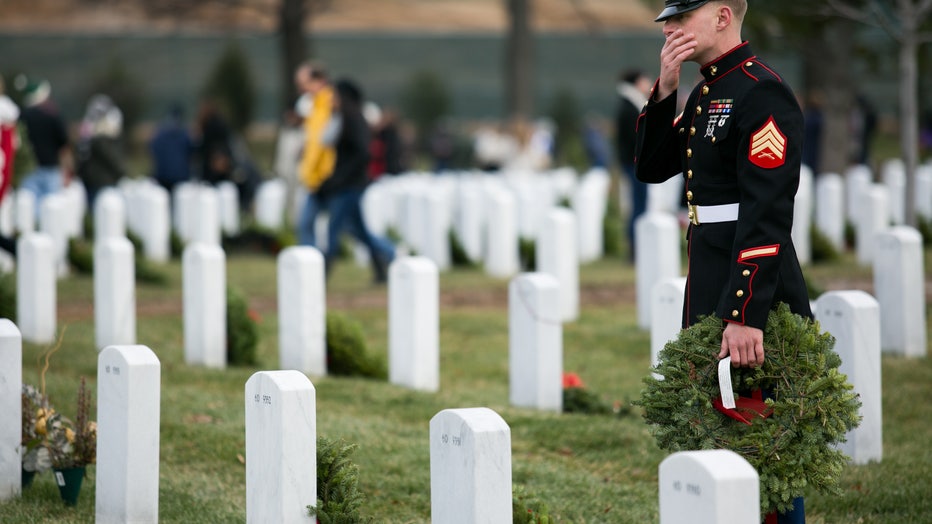 Marine Sgt. James Kledzik pauses while looking for a tombstone to place a wreath on, in Section 60 of Arlington National Cemetery, December 14, 2013 in Arlington, Virginia. (Photo by Drew Angerer/Getty Images)

“We did not make this decision lightly. Despite the controls developed to disperse potential crowds in time and space, and required personal safety protocols, we determined that hosting any event of this scale risked compromising our ability to accomplish our core mission of laying veterans and their eligible family members to rest,” Office of Army National Cemeteries and Arlington National Cemetery Executive Director Karen Durham-Aguilera said in a statement.

The Wreaths Across America organization, meanwhile, said that they had been "working tirelessly with local, state and national officials" to make sure the outdoor events are carried out safely and within local regulations.

"As an organization, we are shocked by this unexpected turn of events," they said in a statement. "To say we are devastated, would be an understatement."