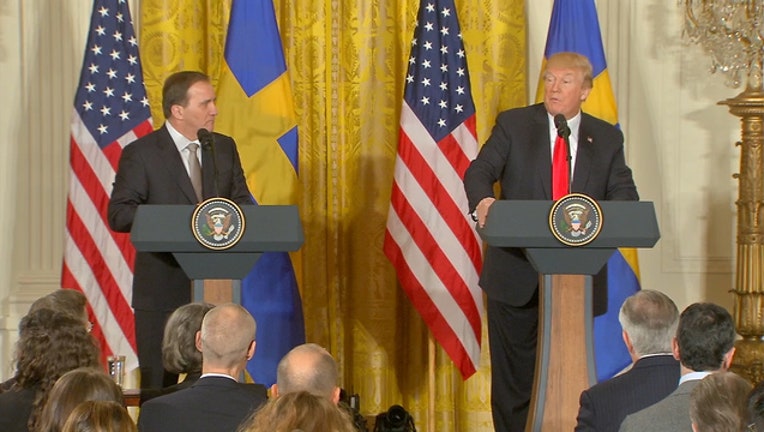 WASHINGTON (AP) - President Donald Trump praised Sweden as a close ally Tuesday, but he also said he had been right in his criticism of the country's immigration policies.

Trump said during a joint news conference with Swedish Prime Minister Stefan Löfven that immigration has "certainly" caused problems in Sweden. He added that he didn't mind taking "a little heat" for his past comments because he "proved to be right."

The president drew widespread criticism more than a year ago when he told a rally that immigration was spreading violence and extremism, pointing to "what's happening last night in Sweden." Nothing extraordinary had taken place in Sweden the previous night, but it happened to be when Trump saw an analyst talking about the subject on Fox News.

Trump has previously claimed vindication, telling Time magazine that soon after his remarks the country had a "massive riot, and death, and problems." In fact, two days after the rally, a riot broke out in an immigrant neighborhood but no one died and the biggest surprise for many Swedes was that a police officer found it necessary to fire his gun.

Löfven was critical at the time, saying it was important to use "facts correctly."

The Swedish leader was asked Tuesday if he stood by that critique after The New York Times reported that gang-related assaults and shootings were on the rise in Sweden and that crime and immigration were expected to be key issues in the country's upcoming general election.

Löfven did not directly address his comments about Trump. He said he'd inherited legislation that was "not sustainable" when it came to refugees and that he'd worked to reduce the number allowed into his country. He also said his government had dedicated more resources to police and cracking down on organized crime and terrorism.

Trump and Löfven also spoke about trade, with Trump saying he planned to move ahead with tariffs on imported steel and aluminum, noting that the U.S. has long been "mistreated" by trade deals. But Löfven said that "increased tariffs will hurt us all in the long run."

They addressed North Korea's reported willingness to negotiate on nuclear weapons. Trump said he was hopeful this would "lead to a very positive result." Löfven said Sweden, which has maintained diplomatic relations with North Korea for decades, will do whatever it can to see that any dialogue is "smooth."

And Trump said he was not worried that Moscow will meddle in the upcoming midterm elections because the U.S. will take steps to prevent it. "Whatever they do, we'll counteract it very strongly," the president said.