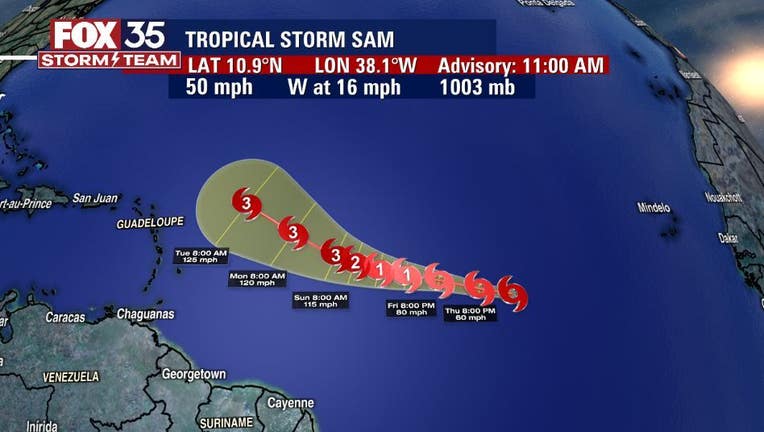 ORLANDO, Fla. - Tropical Storm Sam has formed in the Atlantic, becoming our 18th named storm of the 2021 hurricane season.

Sam is moving toward the west near 16 mph with maximum sustained winds at 50 mph.

"Additional strengthening is forecast over the next several days, and Sam is now forecast to become a hurricane tomorrow and be near major hurricane intensity by the end of the weekend," the National Hurricane Center said on Thursday.

FOX 35 Storm Team Chief Meteorologist Jayme King says the system is forecast to become a major Category 3 hurricane this weekend. We will be tracking and monitoring for where it goes.

As for Peter and Rose, both have downgraded since becoming tropical storms. They are expected to fizzle out.

Meanwhile, a non-tropical low pressure system, the remnants of Odette, is located about 600 miles west-northwest of the westernmost Azores.  Showers and thunderstorms have increased a little near the low, and it could become a subtropical or tropical cyclone while it moves generally southward over marginally warmer waters during the next couple of days.