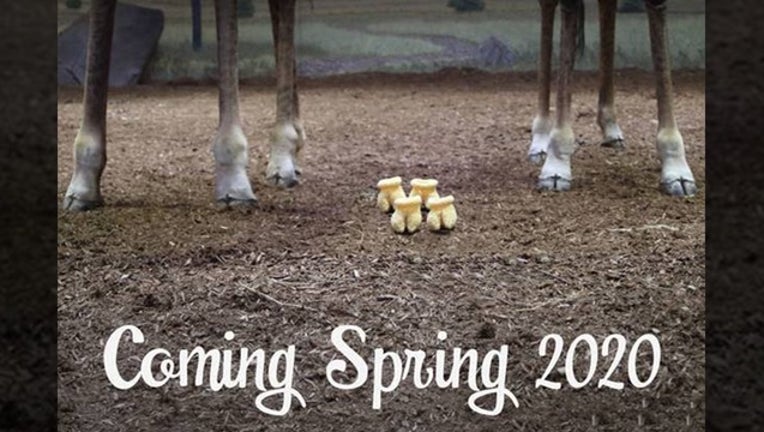 (FOX 35 ORLANDO) - A photo by the Toronto Zoo announcing the pregnancy of one of their giraffe's has gone viral.

On World Giraffe Day, the Canadian zoo posted a photo to Facebook announcing that Mstari, their female Masai giraffe, is expecting her first baby.

"Coming Spring 2020," the announcement reads. The photo features a set of yellow, knitted baby giraffe booties between two sets of giraffe legs that represent the calf's parents, Mstari and Kiko.

"Mstari is five months into her 15-month-long pregnancy, just past the first trimester," the zoo said in a press release. "Based on her conception date of January 18, 2019, the calf is expected arrive in mid-April 2020."

Giraffe pregnancies can range from 400-488 days in length, according to the zoo, so an exact due date is difficult to pinpoint.

The zoo's Wildlife Care Keepers are taking extra precautions and treating the pregnancy as a higher-risk pregnancy, birth and neonatal period because it is "unknown how Mstari will react to the arrival of the baby." They are also working to make sure the habitat where the calf will be born is safe.

"This pregnancy is an important contribution to a genetically healthy Masai giraffe population," said Eric Cole, Acting Director of Wildlife and Welfare. "Masai giraffes are under increasing pressure due to habitat loss and illegal hunting. It is important to educate the public on their plight in the wild and do everything we can to prevent the threats they face and halt declining populations."

Masai giraffes were listed as Endangered by the International Union for Conservation and Nature (IUCN) in 2018, having experienced more than a 50% decline in the past 30 years, according to the zoo. The Toronto Zoo is part of the AZA Masai Giraffe Species Survival Plan (SSP), having 19 giraffes born since 1974. .