"You can’t police a community if you don’t hold yourself to a higher standard than you expect from the people of the community," Sheriff Grady Judd said. "I expect you to be honest, moral and ethical the whole time."

According to investigators, Raczynski pulled over a female suspect on Dec. 21, 2020, and called in a K9 who alerted to drugs in the vehicle. Lawson and Cook responded as backup units.

The deputies found marijuana and the drug alprazolam in the trunk, as well as more marijuana and $723 in small bills in the suspect's pocket.

When Raczynski wrote his initial report, he said they seized the drugs and a large quantity of cash "consistent with small narcotic sales." But on Dec. 23, when he went to process evidence, no cash was ever entered.

Judd said at some point, all three of the deputies had counted the money, and later admitted to investigators that they'd lost the cash.

According to the sheriff, the men had decided to all kick in and replace the lost money, but never did. Judd said they never told their supervisor that the cash was missing.

Fast forward to March 15, where the suspect's charges were reduced to misdemeanor marijuana charges. The woman called the sheriff's office and said she wanted to get her cell phone and her money back.

When a property and evidence officer called Raczynski about the missing money, Judd said he told her to call him back on his personal cell phone. When she did, investigators said Raczynski then told her that all of the evidence was accounted for except the money, which he said went missing after evidence was moved from Lawson's trunk into his trunk. He then reportedly asked the officer he could replace the money, before ultimately telling her to disregard their whole conversation.

"He said, 'Did anybody hear you talking to me? Just forget this conversation occurred,'" Judd said.

A day later on March 16, Raczynski created a supplemental report, adding US currency valued at $723. He electronically signed the report, which was also electronically witnessed by Cook.

The property and evidence officer reported her "suspicious" phone call with Raczynski to her supervisor, who contacted Raczynski's sergeant.

That's when Raczynski told his supervisor that he and Lawson were going to "make it right" by putting their own money into evidence to replace it. The sergeant said that was not proper procedure and told him not to take any further action. The sheriff's office opened a criminal investigation into the matter, saying the initial suspect was now the victim of a theft.

Detectives interviewed the deputies, who all gave "conflicting stories" about what happened to the money. Lawson detailed their plan to replace the cash and submit it into evidence, but said it never happened. After the March 15 phone call, Raczynski called Lawson, who then sent Raczynski $500 via CashApp.

"The plan was for Raczynski to add the remaining $223 of his own money and submit it to P&E," the sheriff's office said in a release. "When that attempt failed, Lawson asked for the money back via CashApp." 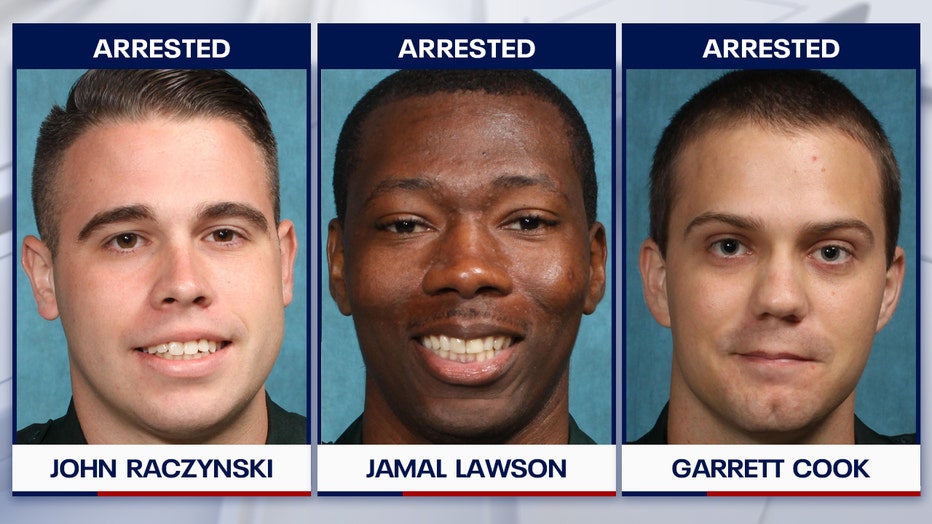 When detectives interviewed Cook, he said he had told his fellow deputies that they should tell their sergeant the money was lost, but said Raczynski didn't want to get in trouble and preferred replacing the money.

"During the ensuing months, Cook was aware of the plan to replace the money and that it was not right, but he took no steps to prevent it, nor did he notify his supervisors," investigators said.

Cook said Raczynski knew his password, and likely used it to fraudulently sign the supplemental report as a witness. Raczynski later admitted to using Cook's password without his knowledge.

Raczynski told investigators that he had transported the suspect to the jail while Lawson took the evidence, and said it wasn't until the next day when he went to submit the evidence that he noticed the money was missing. He said after looking extensively, the three deputies hatched a plan to replace it. He admitted to creating the supplemental report after learning that the arrestee was calling and looking for her money.

All three deputies resigned upon their arrests. The sheriff's office said they would've been terminated if they hadn't submitted their resignations.

"I am mad beyond words," Judd said. "In Polk County vernacular, I’m pissed. They know it, I want the community to know it."

When asked if the deputies showed any signs of remorse, Judd responded, "They found out that getting handcuffs put on you, wasn’t nearly as fun as putting handcuffs on people who commit crimes."

Raczynski faces five felony charges, including conspiracy to commit tampering with evidence, official misconduct for falsifying an official record, tampering or fabricating evidence, forgery, and uttering a forged instrument. He had been with the sheriff's office for three and a half years.

Lawson faces three felony charges, including conspiracy to commit tampering with evidence, official misconduct for causing another person to falsify an official record, and tampering or fabricating evidence by transferring money to Raczynski, knowing it would be submitted as evidence. Like Raczynski, he had also been with the sheriff's office for three and a half years.

Cook faces one felony charge of conspiracy to commit tampering with evidence. He had been with the sheriff's office for five years.

RELATED: Judge considers how much each jury will hear in Seminole Heights killing cases

As for what actually happened to the money, Judd said they still don't know.

"We highly suspect one of them stole it, that it was never lost. We think that's just a lie along the way," he said.

The sheriff’s office is now planning to go back and audit every report each deputy has ever written that dealt with an arrest or seizure of property.

Command staff from the sheriff’s office has been in contact with the state attorney’s office to request the woman’s criminal charges be dropped.

"Because we can’t vouch for these deputies’ credibility," Judd said. "Not only that, but we are working with the legal affairs department to give her her money back."