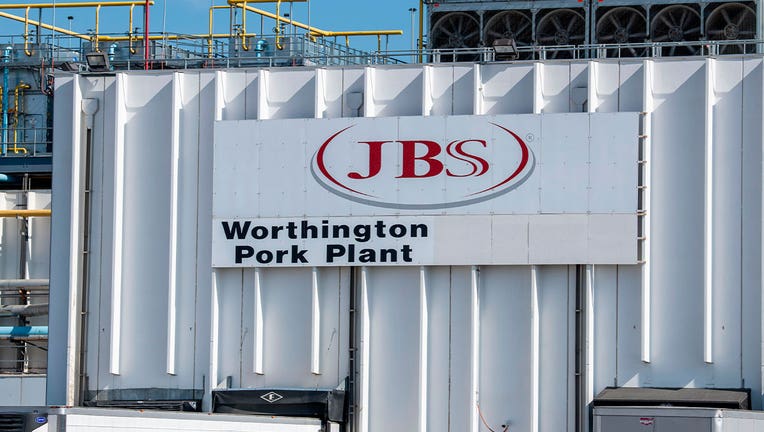 According to federal authorities the JBS pork plant in Worthington, Minnesota was among the facilities targeted by the thieves.

(FOX 9) - Three people are facing charges in what authorities say was a months-long, multi-million dollar scheme targeting meat-packing facilities across the Midwest, including Minnesota.

Delvis Fuentes, Yoslany Del Sol, and Ledier Andino are charged with illegal transport of stolen goods and money laundering in the case.

Agents with Homeland Security say the investigation began in late June 2022 when the Lancaster County Sheriff's Office in Nebraska was notified of the theft of two trailers loaded with beef worth $390,000 outside of Lincoln. When law enforcement ultimately found the trailers, they were empty.

A search of data from the cell phone tower near where the trailers were stolen turned up hits for phones belonging to three Florida residents, Fuentes, Del Sol, and Andino. Later cell phone data put the trio in Nebraska at various times between June and October. In a press release on Tuesday, a spokesperson from the Department of Homeland Security said Omaha agents have connected the trio to 45 thefts at beef and pork plants across Nebraska, Iowa, Minnesota, North Dakota, South Dakota, and Wisconsin, totaling $9 million.

Investigators say the trio was later found driving near Des Moines, Iowa. The trio was later seen traveling together in the same truck driving slowly around two different semi-tractor yards in Iowa. Authorities say they believed the trio was "casing" the yards. On October 13, agents say they put a GPS device on the semis being driven by the trio.

On October 15, authorities learned a trailer had been stolen overnight from Thermo King in Sioux Falls, South Dakota. That trailer was packed with 19 pallets of ham valued at $40,000. Investigators say GPS data put the tracked semi at the theft locations along with the spot where the empty trailers were discovered.

Tracking the semi in real time, agents saw the semi was headed from Sioux Falls to the City of Worthington in southwest Minnesota. Later, GPS data again showed the trio near the JBS meatpacking facility in Worthington.

The next day, October 16, authorities learned three electric pallet jacks had been stolen from a warehouse in Pipestone, Minnesota. Authorities also learned two semi-tractors and two trailers were stolen from JBS. Those trailers contained 22 pallets of pork valued at $150,000.

A GPS device on one of the trailers showed the trailer at a Shopko in Worthington and GPS tracking data showed Fuentes, Del Sol, and Andino were now traveling from that Shopko back toward Miami.

On October 18, Tennessee Highway Patrol pulled over a semi driven by Fuentes for a DOT inspection. Inside the trailer, investigators found 19 pallets of pork that matched the meat stolen in Sioux Falls. A later check of the box labels on the meat confirmed it was meat stolen from Sioux Falls.

Tennessee investigators determined Fuentes had a fake bill of lading, a document that details the shipment. Agents say the bill of lading had the wrong state of origin on it and the transportation company was incorrect. It was also only one page, which is unusual for meat shipments, agents say.

Fuentes also didn't have the proper DOT authority, meaning his semi-tractor did not have the appropriate registration to be hauling goods, agents write. But it appears Fuentes only received citations after the stop.

But on October 20, as federal authorities continued to track the three semis, Fuentes was stopped again, this time for a faulty equipment violation by Florida Highway Patrol. Again, agents say Fuentes showed the fake bill of lading when asked about the cargo. Agents say the trooper noticed discrepancies with the cargo and say Fuentes appeared to be "visibly nervous" during questioning.

Again, the bills of lading that Del Sol and Andino presented were determined to be faked.

The investigation into the thefts is ongoing. The trio will appear in federal court to answer to the charges.