Three suspects who are in a gang were accused of shooting and killing a member of an opposing gang in January. Polk County Sheriff Grady Judd announced they were indicted on first-degree murder charges.

Polk County Sheriff Grady Judd described the suspects as "gang bangers" and identified them as 16-year-old Jermaine Leonard Hawthorne; 17-year-old Mecheal Jean-Charles; and 21-year-old Antonio Bernard Lewis, Jr., whose nicknamed "TJ." Detectives said there is a fourth suspect who they are still trying to identify.

On the night of January 29, the four suspects arrived at a bowling alley around 9:30 p.m., waiting for the victims, who are also part of a gang, the sheriff explained Friday during a press conference. They were using a stolen blue Lexus from Hillsborough County.

"We are not telling the gang’s names because we don’t want to market for them," Sheriff Judd stated, adding that the victims eventually left the bowling alley around 1 a.m. and the suspects followed them.

The vehicles were heading north on Buckeye Loop turned west onto Martin Luther King Blvd. to enter Winter Haven, and that's when the shooting started. Jean-Charles was driving and Hawthorne had a 9mm handgun, Judd said.

"He’s only 16 years old. He’s got a 9mm handgun. TJ, who's 21, has an AK-type assault rifle. They open fire on the silver Camry. All four victims in the silver Camry are struck by many many rounds of ammunition," Sheriff Judd described. "One of our victims, who is only 17 years of age, loses a leg. They had to amputate it. One of our victims – 20 – lost his life. He was murdered. He was shot multiple times. The driver was shot. The fourth victim was shot. One victim returned fire and ultimately struck Antonio. They continued on as they passed, and they dropped Antonio at the hospital and the investigation began." 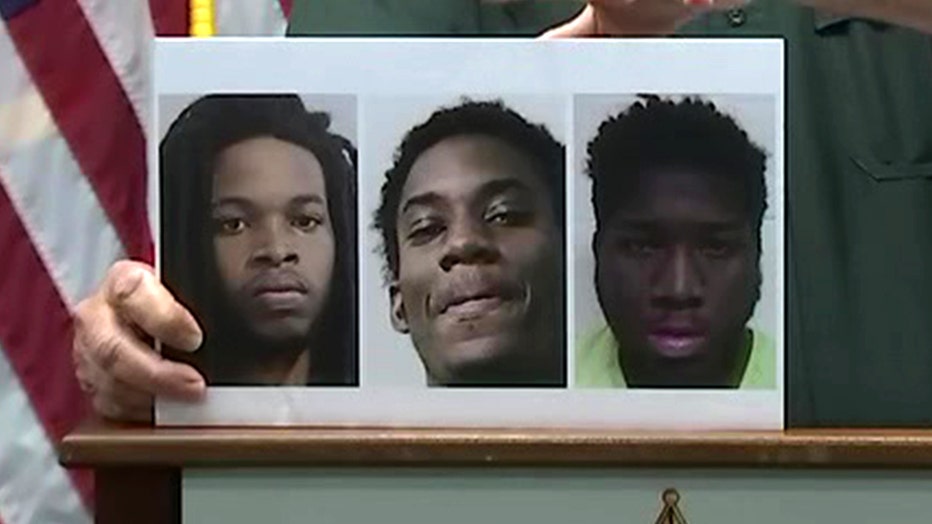 He went on to say that the victim who died was struck four times.

"They're all kids. And they’re all gang members," Sheriff Judd said. "We arrested some of these folks early on for tampering with evidence but now they’re charged with what they should be charged with and that’s first-degree murder. They dumped the guns. We don’t know where they are. We certainly would like to have them."

He said detectives are aware of a fourth suspect but have yet to identify him. Anyone with information on the individual's whereabouts and name – or anyone who knows where the guns are located – is asked to call Heartland Crime Stoppers at 1-800-226-8477.

"Once we identify him, he too can pick up a first-degree murder charge," the sheriff said. "Shouldn’t the fourth guy in the car go with them? Why is he getting off scot-free? Are you really going to hide him when all your buds…are going to prison? We’re not going to let kids shoot kids in this county. You do it, you’re going to prison for a very long time or life. We don’t care if you’re 16 or 17…you're not even supposed to have a gun, much less shooting other kids with it. It’s not happening. You’re going to find out this is not fun and games. The prison system is real, and we’re coming after you."

READ: Polk deputies search for suspect who broke into Davenport vacation rental while family was sleeping

Back in January, detectives said they found a scorched vehicle near the shooting scene, but later on, said it was unrelated.

Judd said that although the crime rate in Polk County is "remarkably low," the agency recently formed a gang task force team to speak to parents of gang members.

"We are focused on educating the parents of these gang bangers. We are sitting on the couch and in the living room with these parents," he described.