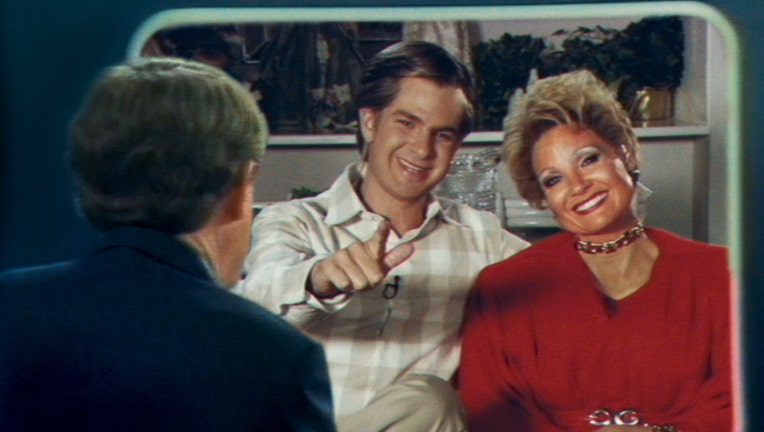 Washington, D.C. - Prestige biopics have a certain formula, and "The Eyes of Tammy Faye" follows it — to blandly redemptive results.

Buried underneath layers of prosthetics and makeup, Jessica Chastain is nearly unrecognizable as televangelist Tammy Faye Bakker. She dives into the role with a higher voice, an uncontrollable giggle and dead eyes that convey Tammy Faye’s progression from beloved religious leader to put-upon wife.

Her transformation is engineered to gain awards-season attention, and the film’s truest-feeling element is how desperately Chastain communicates Bakker’s need for love.

But Chastain’s performance often feels shortchanged by the film’s surface-deep characterization. The film’s makeup and wardrobe departments emphasize Tammy Faye’s infamous look — including tattooed eyeliner, eyebrows and lip liner — and how her interpretation of glamour was a kind of protective armor. Internally, though, what Tammy Faye really believed about her life — her husband Jim’s (Andrew Garfield) constant expansion of their Praise the Lord (PTL) empire and theme park (memorably named Heritage, USA), her bonds with her children, her own relationship with God — is never quite captured by Abe Sylvia’s script or Chastain’s interpretation.

Sylvia, adapting the same-named 2000 documentary here, takes care to avoid implicating Bakker in any of her husband Jim’s crimes. It’s difficult to tell whether "The Eyes of Tammy Faye" wants to focus more on her compassion or her ignorance, but the film sidesteps digging into the ramifications of the "prosperity gospel" that the Bakkers spread to millions of people and that has so seized modern-day Christianity.

Yet the film isn’t a misfire because it fails to specifically judge Tammy Faye, but because it’s so disinterested in contextualizing the Bakkers’ actions and impact. (An indicative example: The film uses Jessica Hahn, the woman who accused Jim of rape and whom he paid off using ministry funds, as a narrative shortcut to clue Tammy Faye into Jim’s misdeeds, but never mentions her name.)

Instead, director Michael Showalter tends to blithely place us within Tammy Faye’s glittery, pastel-lit perspective, indulging her very self-indulgence with fantasy sequences that let Chastain literally and figuratively take center stage. "The Eyes of Tammy Faye" devotes itself to absolving and rehabilitating Tammy Faye, but it doesn’t help viewers know her.

About ‘The Eyes of Tammy Faye’

Leaning on archival footage and newspaper headlines, "The Eyes of Tammy Faye" begins in 1994, travels backward to 1952 and then moves forward to its starting point. Young Tammy Faye (Chandler Head) yearns for approval from her brusque mother Rachel (Cherry Jones), who sees her daughter as living evidence of the sin of her divorce.

In childhood, Tammy Faye develops two lifelong habits: a tendency to talk to herself via puppets and a devotion to talking to God. Her first experience at church ends in speaking in tongues, a seizure, and urinary incontinence — which all the other practitioners interpret as Tammy being pure-hearted in her faith. 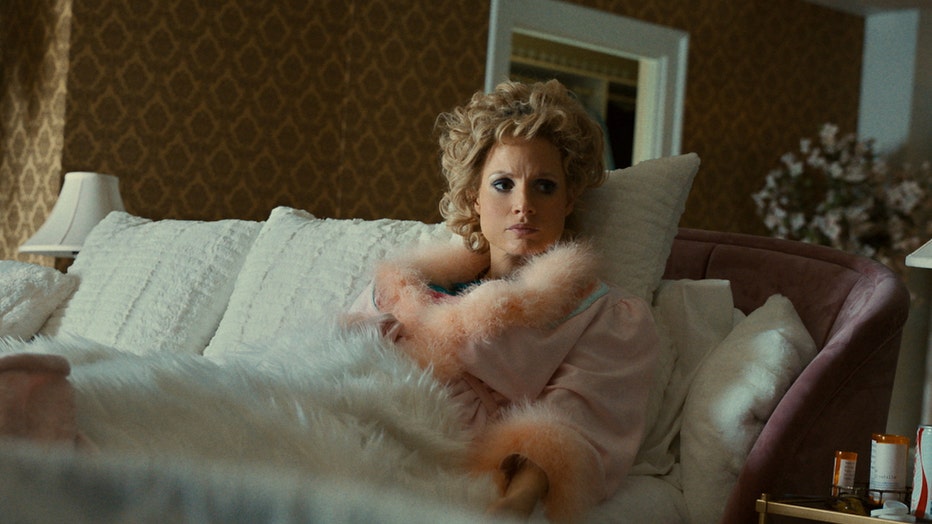 While attending North Central Bible College in 1960, she meets Jim Bakker (Garfield). He’s somewhat fumbling, but he knows his scripture, laughs at her zaniness and hangs on her every word. Despite many red flags about Jim’s lack of impulse control, they’re soon married and working as traveling preachers, spreading their message that "God has canceled the claim of poverty and deprivation on our lives," as Jim says.

After becoming stars on Pat Robertson’s Christian Broadcasting Network, they decide to break off and start their own PTL network. Great wealth, and a public downfall, await.

"The Eyes of Tammy Faye" plays with its timeline, which makes for both distracting jumps in physical appearance for Garfield and Chastain and character-development gaps. Having Tammy repeatedly say of her faith "It’s love" isn’t as illuminating as the film seems to think it is.

Is Tammy Faye a blissfully simple wife who doesn’t understand that defending women and gay people from Jerry Falwell’s (Vincent D’Onofrio) attack on the "liberal agenda" is putting her husband’s career in danger? Or is she a master manipulator who knows that her flirtatiousness and vivaciousness are key to her husband’s—and her own—material gain?

Perhaps Sylvia and Showalter are arguing that Tammy Faye was both, and of course, people can contain multitudes. They can hold contrasting beliefs, love different people at the same time, and see themselves in a way totally separate from how others do. But the flexibility that "The Eyes of Tammy Faye" affords ultimately feels like a refusal to acknowledge that perhaps Tammy Faye was more complicit in PTL’s corruption than she would care to admit.

Some of the best scenes in the film focus on her loyalty to all people, and to her belief that the Christian faith is primarily about acceptance (the "God loves you" slogan that she creates, and that Jim co-opts). But for a film that begins with its subject saying, "This is who I am," "The Eyes of Tammy Faye" doesn’t dig deep enough into that statement.

About the writer: Roxana Hadadi is a film, television, and pop culture critic. She is a member of the Washington DC Area Film Critics Association, the Alliance of Women Film Journalists, and the Online Film Critics Society, and is a Tomatometer-approved Top Critic on Rotten Tomatoes.

The Whole Wide World (1996): Vincent D’Onofrio stars in this based-on-a-true-story romance, in which "a 1930s Texas school teacher [has an] affair with a famous author, as events and clashing hopes drive him into an imaginary world." Also stars Renee Zellweger.

Stella: Live in Boston (2008): This comedy trio, comprised of Michael Showalter, Michael Ian Black and David Wain, takes the stage for a live show "in all of their uncensored glory."