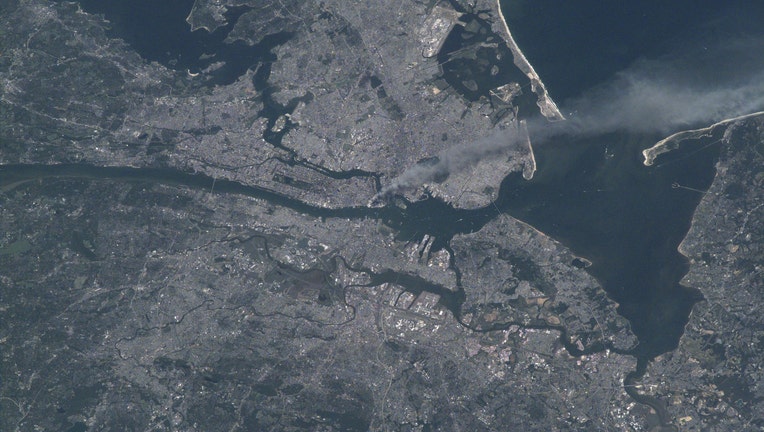 Visible from space, a smoke plume rises from the Manhattan area after two planes crashed into the towers of the World Trade Center. This photo was taken of metropolitan New York City (and other parts of New York as well as New Jersey) the morning of

NASA shared a somber image on Twitter Sunday as the nation reflects on the thousands of Americans killed when a group of terrorists launched coordinated attacks against the U.S. by hijacking and crashing commercial airline planes at the World Trade Center, the Pentagon, and Shanksville, Pa. 21 years ago on Sept. 11, 2001.

The space agency said the photo was taken on that "terrible day" from the International Space Station which orbits the Earth by Astronaut Frank Culbertson. It shows the smoke rising from the Twin Towers in New York City.

It's a solemn reminder of the deadliest terror attack on U.S. soil.

The 9/11 attacks claimed the lives of 2,977 victims, including 343 FDNY firefighters, 23 members of the NYPD and 37 Port Authority police officers, and countless others.

"On this 21st anniversary of that terrible day, we honor the victims and heroes of the 9/11 terrorist attacks," NASA said in the tweet.

The space agency assisted FEMA in New York in the days following the attacks and honored the victims by providing flags flown aboard the Space Shuttle to their families, NASA's website stated.