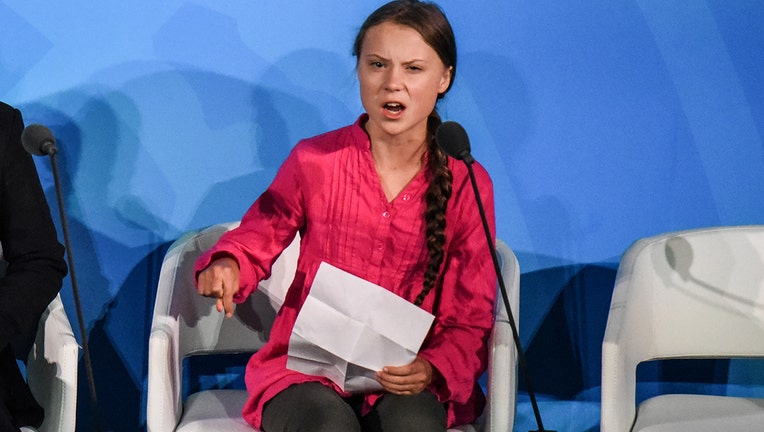 EDMONTON, Canada - A newly painted mural of 16-year-old Swedish climate activist Greta Thunberg was vandalized in Canada with a pro-oil message, and later with French slurs.

Thunberg on Friday lead a climate strike outside the Alberta legislature in the province’s capital city of Edmonton. The Province newspaper reported about 8,000 were in attendance.

Local artist AJA Louden told the Canadian Broadcasting Corporation that he painted the mural on a free expression graffiti wall across the city at the same Thunberg spoke. While the CBC was filming footage of the mural Friday, James Bagnell sprayed “Stop the Lies. This is Oil Country!!!" over the image of the teenager’s face.

"This is Alberta. This is oil country. My father has worked in the oil industry. We don't need foreigners coming in and telling us how to run our business, support our families, put food on our tables," he told the CBC.

"I think it's absolutely intolerant of them to tell us how to change our lives and our people. She should go back to her country and try to make her country better," he continued. Bagnell also said Thunberg was just “doing what she's told,” and should “just shut up until you have solutions."

The CBC reported that by Sunday afternoon the mural had been even further defaced. Thunberg’s eyes had been blackened and crossed out, a French derogatory slur had been added and someone wrote the message “Agent provacateur out of Canada!”

The artist initially included the messages “Thank you, Greta,” and “Thank you, Beaver Hills Clan,” a reference to the grassroots group that planned Thunberg’s event. Louden told the CBC he was not upset that his mural was defaced given the wall where he painted it welcomes all forms of free expression.

“I painted the portrait over somebody else’s art work,” Louden said. “So I don’t feel upset at all about somebody going over mine. One of the goals with painting that portrait was to further the conversation.”

Critics said Thunberg’s speech—which was peppered with cries from pro-oil and gas counter-protesters—called for action on climate change but failed to propose any plans for possible solutions, the Edmonton Journal reported.

She said wealthier “countries such as Canada and Sweden need to get down to zero emissions much faster so people in poorer countries can heighten their standard of living by building the infrastructure we have already built,” according to Reuters.