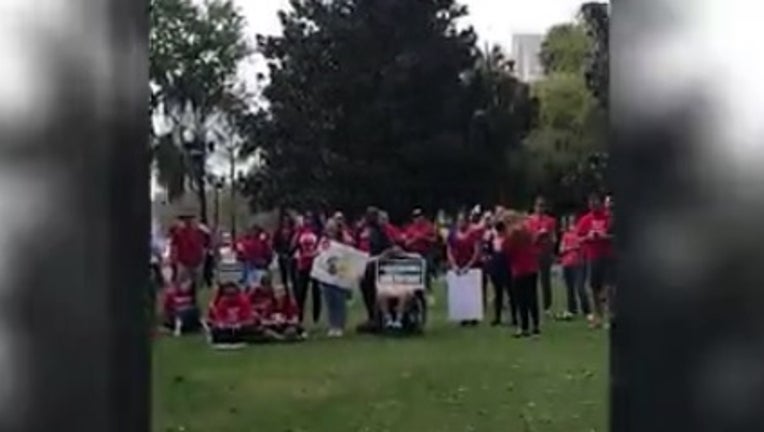 ORLANDO, Fla. - Teachers continued their calls for more funding for students and schools and fair pay Saturday in Downtown Orlando.

On Monday, January 13, teachers across Central Florida took a massive field trip to the state capitol for the ‘Rally in Tally’ to push for more funding for teachers and schools and smaller classroom sizes. About a month later, on Saturday, teachers continued their calls for change at Lake Eola Park.

Education leaders are worried about a teacher shortage across the state, saying classrooms need about 3,000 teachers statewide and there aren’t enough substitute teachers at times.

In addition, the National Education Association ranked Florida 46th in the country for teacher pay.

Teachers are rallying now because lawmakers are currently working on the state budget, as we are in the middle of the legislative session.

“As this debate continues in the legislature, that we’re prioritizing all of our educators and support staff and that we’re also making sure we address standardized testing,” said State Representative Anna Eskamani.

Eskamani said it is an important time to take action.

“We are seeing this exit of teachers. We’re seeing fewer people go into education as a field of study so this really is a crisis,” Eskamani said.

Florida Gov. Ron DeSantis has proposed increasing the base teacher salary to $47,500, which would be the largest teacher pay increase in the state’s history. However, veteran teachers say they are still wary.

Not just to new teachers, who also, of course, need it, but to the veteran teachers, the bus drivers, the cafeteria workers,” Avery said.

Teachers say they will continue to make their voices heard, especially until the final budget passes, which would be before the legislative session ends on March 13.