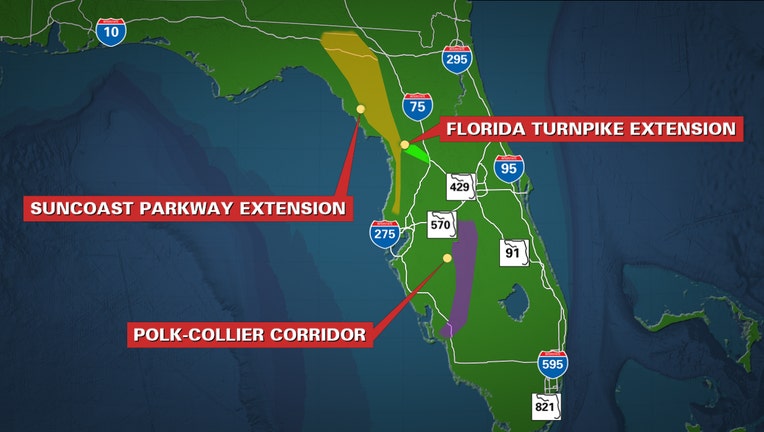 TALLAHASSEE, Fla. - The Tallahassee-based Florida TaxWatch is raising questions about the cost and need for a project that would extend the Suncoast Parkway from Citrus County to Jefferson County at the northern end of the state.

But TaxWatch, which weighs in on numerous state fiscal issues, is not joining groups opposed to the road, which is one of three major toll-road projects that the Legislature backed last year to stretch from Collier County to Jefferson County.

TaxWatch President and CEO Dominic Calabro, in an accompanying news release, urged “further analysis of the costs, benefits, and practicality of the Suncoast Connector, especially now that our state is facing unprecedented revenue shortfalls due to COVID-19.”

“It is our sincere hope that our analysis of the need for, cost of, and revenue potential from the Suncoast Connector helps ensure this program proceeds thoughtfully to strengthen the self-supported and self-funded Florida Turnpike System and serve Floridians well throughout the state as a positive investment of taxpayer dollars,” Calabro added.

The release came a day before the Florida Department of Transportation’s task force on the Suncoast Connector will hold a “hybrid” meeting on the proposed road. The meeting will be held online because of the pandemic, but members of the public also can travel to Riverside Christian School in Trenton and the Jefferson County K-12 A Somerset School in Monticello to provide input.

The Department of Transportation did not immediately respond with comments Monday on the TaxWatch report.

The project was approved by the Legislature in 2019 along with an extension of the Florida Turnpike from Wildwood to connect with the Suncoast Parkway and the construction of a new multi-use corridor, including a toll road, from Polk County to Collier County. The legislation, a priority of Senate President Bill Galvano, R-Bradenton, eventually dedicates up to $101.7 million a year to the roads.

Similar task force meetings will be held Wednesday on the turnpike extension and Thursday on the project linking Polk and Collier counties.

The TaxWatch report only looked at the Suncoast Connector.

Supporters of the roads, such as the Florida Chamber of Commerce, Associated Industries of Florida, the Florida Ports Council and the Florida Trucking Association, argue the projects will prepare the state for future growth and aid in disaster evacuations.

In its report, titled “The Suncoast Connector: What We Still Need to Know,” TaxWatch said the Suncoast Connector could cost between $4 billion and $10.5 billion. The report indicated it could be difficult to produce enough revenue through toll rates in line with the rest of the turnpike system to cover bonds for construction.

“The Wekiva Parkway is cited as an example of how this can be done,” the report’s conclusion said. “That 25-mile toll road cost $1.76 billion, or $70 million per mile. The Suncoast Connector is six times as long.”

Assuming the cost falls in the midpoint of the estimated range, the connector would need to generate $2.37 million per mile in revenue to pay off construction bonds, which is 10 percent more than the average revenue per mile of the entire Florida Turnpike System, the report said.

The report gave several examples in Florida of toll revenues falling short of expectations, with the most “glaring” the Garcon Point Bridge in the Panhandle --- known as “Bo’s Bridge” for former House Speaker Bolley “Bo” Johnson, who pushed its approval.

The TaxWatch report also said approval of the Suncoast Connector project through the Legislature “subverts” a Department of Transportation process for planning future statewide corridors and was made before a needs assessment, a project-development and environment report or a feasibility analysis.

A benefit attributed to the toll-road projects is that the corridors would help facilitate expansion of broadband technology to rural communities. The TaxWatch report, however, said the work could be accomplished without toll roads.

An initial timeline called for the task forces to provide final reports by October, with construction expected to begin before the end of 2022. However, because of COVID-19, the deadline for the task-force reports has been pushed back to Nov. 15.