The community came together to help their neighbors in need in the wake of Hurricane Ian. Deltona firefighters and the Volusia County Sheriff’s Office held a supply drop-off event in Deltona.

DELTONA, Fla. - The community came together to help their neighbors in need in the wake of Hurricane Ian.

"Whatever we can do to help because we know a lot of people are flooded out and stuff like that," Merle Baylor, a Daytona Resident, said.

Baylor and Brenda Kissinger are just two Deltona residents who dropped off donations at the Center at Deltona to help others in their community who lost everything in Hurricane Ian.

"You see so many people actually have nothing and when you do have enough to give, and you’re actually doing something good for people, it makes you feel good," Kissinger said.

Brandon Brower with Deltona Professional Firefighters said he and his coworkers witnessed the devastation firsthand. 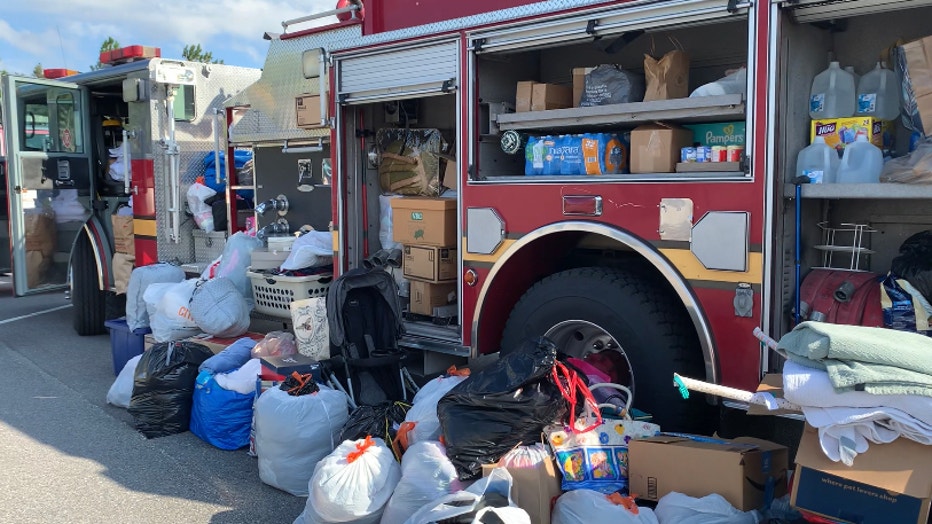 "We did a lot of rescues with our boat. Just getting people out of their houses and onto dry land," Brower said. "I don’t think a lot of people are able to even get to their homes still, so they were left with nothing, and we’re just trying to get them something."

The firefighters partnered with the Volusia County Sheriff’s Office for the supply drive, and the community delivered. People filled up a fire truck and sheriff’s office vehicle with basic supplies like toiletries, clothes, food and diapers.

"I’m not in need, so somebody else is," Burns said.

"It was just an awesome experience to see people come together to help people in a pretty bad time when they’re being forced out of their homes," Volusia County Deputy Manny Pena, said.

"Nobody could prepare for this. This wasn’t something we could have had a script for, so to see the community come together during a time of need shows just how strong we really are," Bradford said.

Organizers said the goal is to keep all donations in Deltona. They will work with community leaders to distribute them to families in need.