CAIRO - Sudan’s military seized power Monday, dissolving the transitional government hours after troops arrested the prime minister. Thousands of people flooded into the streets to protest the coup that threatens the country’s shaky progress toward democracy.

Security forces opened fire on some of the crowds, and three protesters were killed, according to the Sudan Doctors’ Committee, which said 80 people were wounded.

The takeover, which drew condemnation from the United Nations, the United States and the European Union, comes more than two years after protesters forced the ouster of longtime autocrat Omar al-Bashir and just weeks before the military was supposed to hand the leadership of the council that runs the country over to civilians.

After the early morning arrests of Prime Minister Abdalla Hamdok and other senior officials, thousands poured into the streets of the capital, Khartoum, and its twin city of Omdurman. They blocked streets and set fire to tires as security forces used tear gas to disperse them.

As plumes of smoke rose, protesters could be heard chanting, "The people are stronger, stronger!" and "Retreat is not an option!" Videos on social media showed crowds crossing bridges over the Nile to the center of the capital. The U.S. Embassy warned that troops were blocking parts of the city and urged the military "to immediately cease violence."

Records from a Khartoum hospital obtained by The Associated Press showed some people admitted with gunshot wounds.

The head of the military, Gen. Abdel-Fattah Burhan, announced on national TV that he was dissolving the government and the Sovereign Council, a joint military and civilian body created soon after al-Bashir’s ouster to run the country. 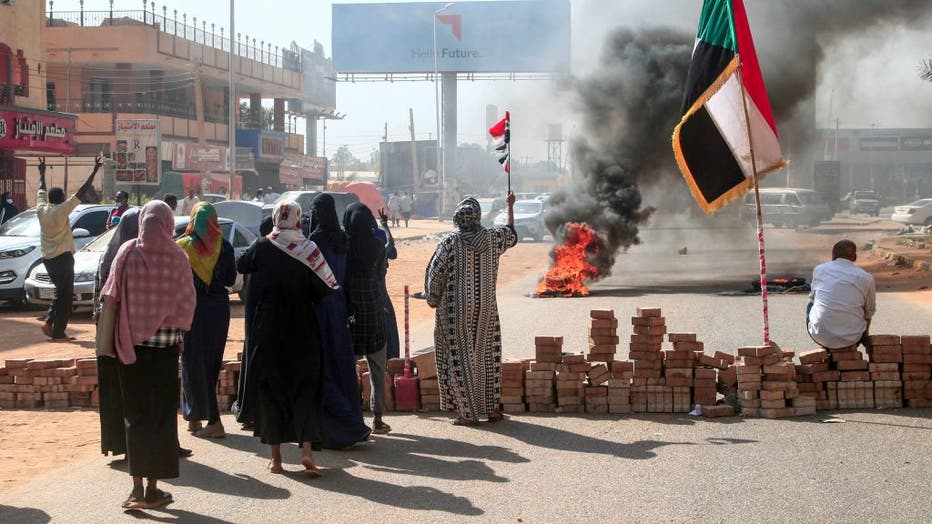 Sudanese protesters lift national flags next to a brick roadblock during a demonstration in the capital Khartoum, on Oct. 25, 2021, to denounce overnight detentions by the army of members of Sudan's government. (Photo by -/AFP via Getty Images)

Burhan said quarrels among political factions prompted the military intervention. Tensions have been rising for weeks over the course and the pace of the transition to democracy in Sudan, a nation in Africa linked by language and culture to the Arab world.

The general declared a state of emergency and said the military will appoint a technocratic government to lead the country to elections, set for July 2023. But he made clear the military will remain in charge.

"The Armed Forces will continue completing the democratic transition until the handover of the country’s leadership to a civilian, elected government," he said. He added that the constitution would be rewritten and a legislative body would be formed with the participation of "young men and women who made this revolution."

The Information Ministry, still loyal to the dissolved government, called his speech an "announcement of a seizure of power by military coup."

As darkness fell in Khartoum, barricades were still burning and occasional gunshots could be heard, said Volker Perthes, the U.N. special envoy for Sudan, at a briefing in New York.

White House spokesperson Karine Jean-Pierre said the U.S. was "deeply alarmed at reports of a military takeover" and called for the immediate release of the prime minister and other officials.

"The actions today are in stark opposition to the will of the Sudanese people and their aspirations for peace, liberty and justice," Jean-Pierre said.

The Biden administration is suspending the provision of $700 million in emergency economic aid to Sudan that had been allocated to help the transition, said State Department spokesman Ned Price. He called it a "pause," and urged the civilian-led government be immediately restored.

Guterres also called for the release of the government officials, the spokesman said, as did the African Union. EU foreign affairs chief Joseph Borrell tweeted that he was following the events with the "utmost concern."

Michelle Bachelet, the U.N. High Commissioner for Human Rights, warned that Sudan could slip backward, urging the military to release the officials, withdraw from the streets and settle differences with civilians in the transitional government "through dialogue and negotiation."

Since al-Bashir, who remains in prison, was forced from power, Sudan has worked to slowly rid itself the international pariah status it held under the autocrat. The country was removed from the United States’ state supporter of terror list in 2020, opening the door for badly needed foreign loans and investment.

But Sudan's economy has struggled with the shock of a number economic reforms called for by international lending institutions. U.S. Sen. Chris Coons, a member of the Foreign Relations Committee and a close ally of President Joe Biden, warned in a tweet that the U.S. could cut aid to Sudan "if the authority of PM Hamdok & the full transitional government is not restored."

In recent weeks, there have been concerns that the military might be planning a takeover, and in fact there was a failed coup attempt in September. Tensions only rose from there, as the country fractured along old lines, with more conservative Islamists who want a military government pitted against those who toppled al-Bashir in protests. In recent days, both camps have taken to the streets in demonstrations.

Amid the standoff, the generals have called repeatedly for dissolving Hamdok's transitional government — and Burhan, who leads the ruling Sovereign Council, said frequently that the military would only relinquish power to an elected government, an indication that the generals might not stick to the plan to hand leadership of the body to a civilian sometime in November. The council is the ultimate decision-maker, though the Hamdok government is tasked with running Sudan’s day-to-day affairs.

As part of efforts to resolve the crisis, Jeffrey Feltman, the U.S. special envoy to the Horn of Africa, met with Sudanese officials over the weekend, and a senior Sudanese military official said he tried unsuccessfully during his visit to get the generals to stick to the agreed plan.

The arrests began a few hours later, said the official, who spoke on condition of anonymity because he was not authorized to brief media. The official said the prime minister and the others were being detained in a military camp outside Khartoum.

Perthes said he and Feltman, in parallel meetings with political and military leaders in recent weeks, had tried to urge a return to dialogue and against a coup, which he said would "squander the achievements of the first two years of the transition."

The military has been emboldened recently in its dispute with civilian leaders by the support of tribal protesters, who blocked the country’s main Red Sea port for weeks. The most two senior military officials, Burhan and his deputy Gen. Mohammed Hamdan Dagalo, also have close ties with Egypt and the wealthy Gulf nations of Saudi Arabia and the United Arab Emirates.

The first reports of a possible military takeover emerged before dawn, and the Information Ministry later confirmed them hours later, saying Hamdok and several senior government figures had been arrested and their whereabouts were unknown. Internet access was widely disrupted and the country’s state news channel played patriotic traditional music.

Hamdok’s office denounced the detentions on Facebook as a "complete coup." It said his wife was also arrested.

Sudan has suffered other coups since it gained its independence from Britain and Egypt in 1956. Al-Bashir came to power in 1989 in one such takeover, which removed the country’s last elected government.

Among those detained Monday were senior government figures and political leaders, including the information and industry ministers, a media adviser to Hamdok and the governor of the state that includes the capital, according to the senior military official and another official. Both spoke on condition of anonymity because they were not authorized to share the information with the media.

After news of the arrests spread, the country’s main pro-democracy group and two political parties issued appeals to the Sudanese to take to the streets.

The Communist Party called on workers to protest what it described as a "full military coup" orchestrated by Burhan.