Port Canaveral is saying bon voyage to the 2021 fiscal year, one that the port’s CEO, Capt. John Murray, says they're glad to put behind them.

PORT CANAVERAL, Fla. - Port Canaveral is saying bon voyage to the 2021 fiscal year, one that the port’s CEO, Capt. John Murray, says they're glad to put behind them.

"The most important thing: it's over! Okay?" Murray said, adding, "We're not going to talk about 2021 anymore!"

In his State of the Port address, Murray made no bones about this past year being a tough one for the port.

"Seventeen months without cruise revenue in this port is horrific," he said, "but we got through it! And that's the important part." 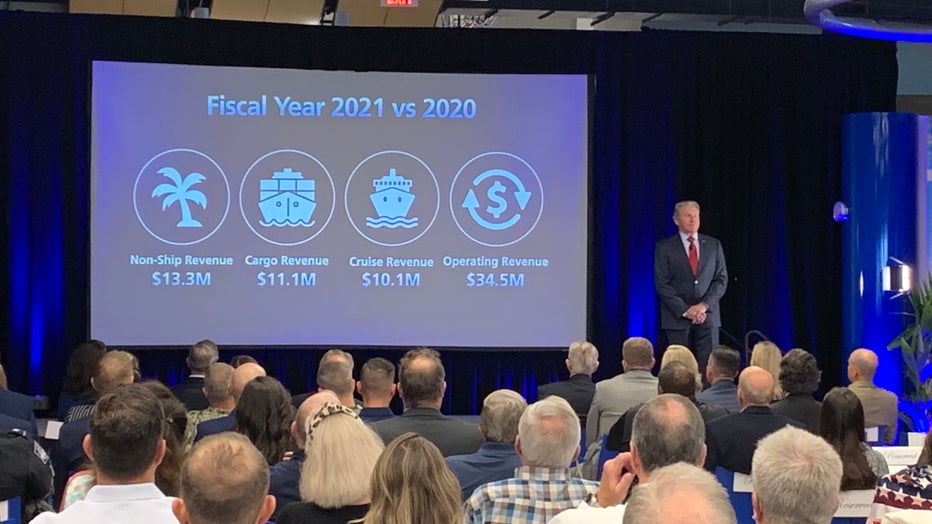 Murray said now, they're looking ahead.

"We have an extremely bright future," he said. "While the cruise industry was suspended, we were able to talk with all of our partners and, as I showed in some slides, our guest capacity on the hardware here today is 32% higher than it was in 2019."

The port’s two main business areas are moving raw goods like lumber, construction materials, and equipment for the space program and, of course, cruises.

"We have a tremendous upside potential right now as cruising returns," Murray said. "Our budgeted numbers were 62% for that level of capacity. If we get to 80% it's gonna be a fantastic thing for the port."

Murray said he is especially looking forward to more construction projects at the port. They also plan to expand a cruise terminal to let bigger ships dock there.

"To have a brand-new cargo berth is exciting for the port," he said. "That's what we do, cruise and cargo, and for one of our core business units to have a nice new dock is exciting for us."