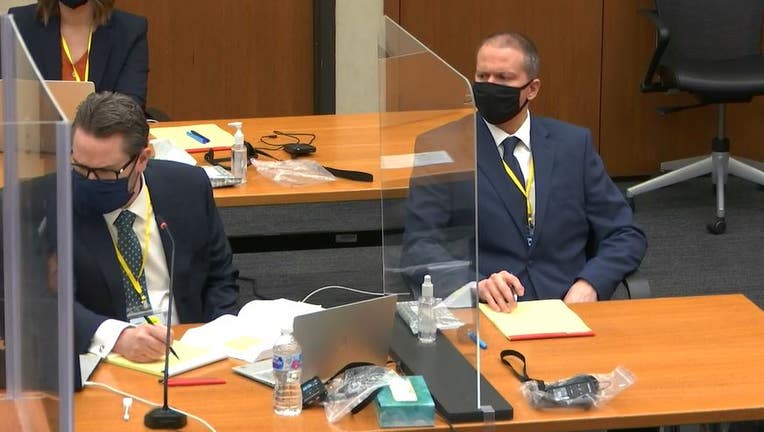 Derek Chauvin (right) and attorney Eric Nelson (left) in the courtroom on Day 1 of jury selection in the trial for the death of George Floyd.

MINNEAPOLIS (FOX 9) - The prosecution in the Derek Chauvin trial in the death of George Floyd filed a motion with the Minnesota Court of Appeals on Monday to stop the trial from proceeding until the district court regains full jurisdiction over the case.

The motion from the prosecution, led by Minnesota Attorney General Keith Ellison, seeks a delay of the proceedings until the issue of a third-degree murder charge is settled to prevent any potential issues with the integrity of the case.

"There is no need for this kind of uncertainty in any case, let alone a case of this magnitude," the motion stated.

The Minnesota Court of Appeals ruled on Friday that Cahill must reconsider reinstating a third-degree murder charge against Chauvin.

The Minnesota Court of Appeals ruled the trial judge for the Derek Chauvin case must reconsider reinstating the third-degree murder charge in his case, according to an opinion issued Friday.

"The district court therefore erred by concluding that it was not bound by the principles of law set forth in Noor and by denying the state’s motion to reinstate the charge of third-degree murder on that basis," read the order.

Chauvin's defense attorney, Eric Nelson, told the court on Monday he plans to file a petition with the Minnesota Supreme Court to overturn the Court of Appeals ruling on the third-degree murder charged. The Appeals Court order on the third-degree murder charge has not formally been entered, and won’t be entered pending the Supreme Court appeal, which is now holding up the trial proceedings.