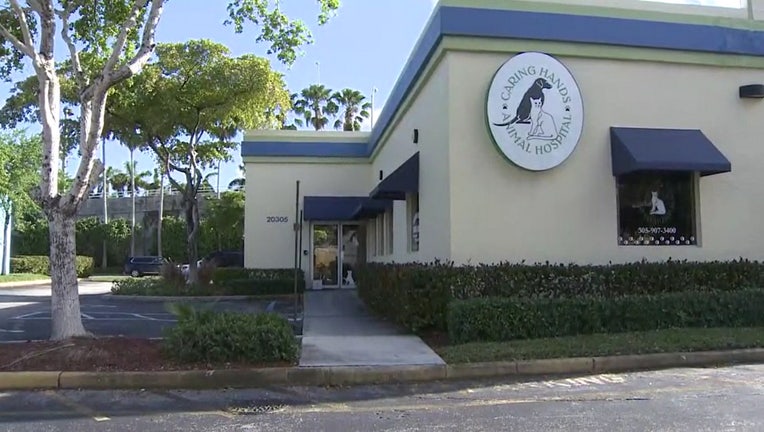 Prentiss Madden, 40, was arrested by federal agents on Tuesday and ordered held pending a Friday bond hearing, court records show. Court records did not list a lawyer for him, and it wasn’t immediately clear who could speak in his defense.

Madden was medical director of Caring Hands Animal Hospital in Miami until he was fired two weeks ago, when colleagues learned he was under investigation for "these heinous and unthinkable crimes," the hospital said in a statement on Wednesday.

RELATED: Over 40 dogs rescued from dogfighting ring in Daytona Beach

"Our legal team, and every single member of the Caring Hands family will be doing everything in our power to aid law enforcement and facilitate their investigation and prosecution," the statement read.

Madden’s charges fall under a federal law outlawing animal abuse, which was initially created in response to a genre of cruelty in which people record the harming of animals for the sexual gratification of viewers, the Miami Herald reported.

The Preventing Animal Cruelty and Torture Act, signed into law by President Donald Trump in 2019, makes the production of torture videos punishable by up to seven years in prison.

A criminal complaint unsealed Wednesday said investigators were notified by the file-sharing web service Dropbox that a user had received more than 1,600 files of suspected child pornography. The files were traced to Madden’s home.

Homeland Security agents raided Madden’s home on Feb. 24, and found files in which Madden discussed "the sexual abuse of animals and children," the complaint said.

The complaint alleges that Madden had multiple photos and videos of images "depicting bestiality." The report said the files were digitally coded as having been taken at his home.

Madden also shared images in a chat and admitted in detail to having sex with and abusing dogs, the criminal complaint said.

Another explicit video was traced as having been taken at the animal hospital in May 2018.

"This leads me to believe that Madden may be abusing animals entrusted to his care," Agent Leah Ortiz wrote in the complaint.

"If the allegations are true, they’re horrifying," Regina Vlasek, who runs Saving Sage Animal Rescue Foundation in South Florida, told WSVN. She said Madden offered her rescue group discounts and treated all of the dogs they rescued.

"The closest relationships that we have are with our veterinarians, those are the people that we trust," Vlasek said. "I was so sick after I heard this that I threw up."

Madden, a native of north Alabama, described himself online as the "proud pet parent" of a Shih Tzu named Lucky and two Burmese pythons, Mocha and Sherbert.