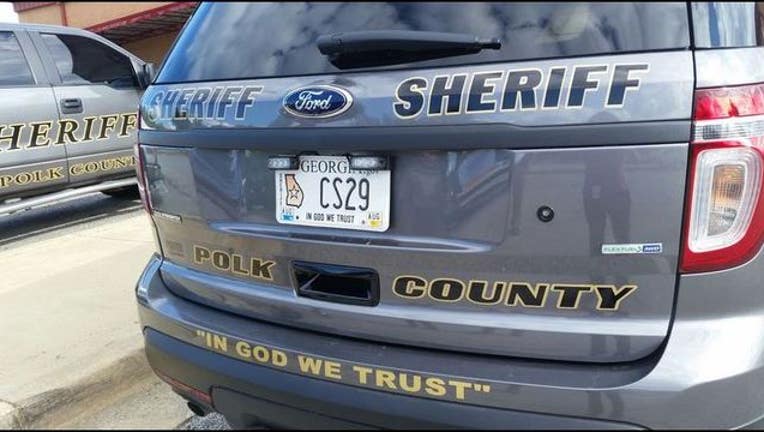 POLK COUNTY, Ga. - The sheriff of Polk County is taking a stand. Sheriff Johnny Moats put the words "In God We Trust" on the back of his patrol car. He said when he put a photo of his car on social media people started talking.

"It went all over the country. Within a couple of days I had 1600 shares and close to 500 friend requests from all over," said Sheriff Moats.

Moats admitted he was nervous about putting "In God We Trust" on the back of his car because of any potential backlash, but he said he decided he felt in his heart that it was the right thing to do.

"It's already on my state government tag, it's on my currency and I just feel like it needs to be on our patrol cars," said Sheriff Moats.

Many of his deputies followed his lead and placed it on their cars. The sheriff said people called him saying they would pay for "In God We Trust" to be put on all the deputies cars as well. Many of the deputies had already paid to have it done.

"It's a very dangerous job and our lives are on the line every day and I feel like we need to have that on our vehicles," said Moats.

The sheriff said it's about more than the badge, he said our country is heading in the wrong direction, and this is something we all need.

"Seeing the direction this country is headed, we need God back in our lives," said Moats.

The sheriff said he's received thousands of comments on social media and he says of those only two were negative.